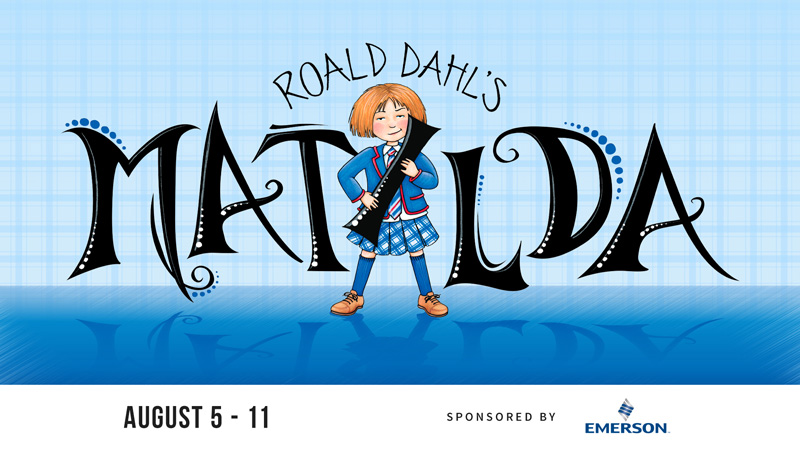 “The Muny premiere of Matilda has inspired us all to be a ‘little bit naughty,'” said Muny Artistic Director and Executive Producer Mike Isaacson. “This team and company promise to bring the magical world of Roald Dahl to our stage in a truly magical way.”

As previously announced, Roald Dahl’s Matilda is directed by John Tartaglia and choreographed by Beth Crandall with music direction by Michael Horsley.

MATTEA CONFORTI (Matilda) Muny debut! Mattea made her Broadway debut as the title role in Matilda at age 9. Other Broadway credits include Sunday in the Park with George and the original cast of Disney’s Frozen (Young Anna), which she was a part of from the very first workshop. On television, she can be seen on AMC’s NOS4A2, recurring as Elisa Marie on the hit Starz series Power, as well as Gotham (CW) and The Good Cop (Netflix). On the big screen, Mattea can be seen in the films 3 Generations, The Super and The Viper Club opposite Susan Sarandon. She is also the voice of Moon on the animated series Ollie and Moon.

DARLESIA CEARCY (Mrs. Phelps) Muny debut! Darlesia is a Broadway veteran whose shows include Ragtime (Sarah, Helen Hayes nominee), Shuffle Along (Lottie Gee), The Color Purple (Nettie), Once on This Island (Erzulie), The Book of Mormon and The Goodbye Girl. She was a Viva Award nominee for her single Everlasting Pictures, which appeared on MTV’s Most Wanted, VH1 and Top of the Pops in London. TV: Madam Secretary, House of Cards, Elementary and more. IG@darlesiacearcy

WILL SWENSON (Miss Trunchbull) Muny debut! Broadway: Waitress, Disaster!; Les Misérables, Priscilla: Queen of the Desert, Hair, 110 in the Shade, Lestat, Brooklyn! Off-Broadway: Nantucket Sleighride, Jerry Springer: The Opera (Obie Award), Murder Ballad, Rock of Ages, Little Miss Sunshine, Adrift in Macao, Two Gentlemen of Verona, Pericles. Tours/Regional: Miss Saigon, We Will Rock You, Camelot, It’s a Bird, It’s a Plane, It’s Superman!; The Pirates of Penzance, A Moon for the Misbegotten, The Royal Family of Broadway. Film/TV: The Kitchen, The Greatest Showman, This is Where I Leave You, The Switch, Law & Order (SVU and CI), The Good Wife, No Tomorrow, The Code.

About the show:
Roald Dahl’s Matilda features a book by Dennis Kelly and music and lyrics by Tim Minchin.

With a story inspired by the eccentric genius of internationally-acclaimed author Roald Dahl, and a world inspired by St. Louis native and world-wide artistic legend Mary Engelbreit, Matilda shows how imagination is exactly what we all need to navigate life’s many challenges. When sent to a dismal boarding school, Matilda uses her clear eyes and keen smarts to help her discover her own surprising powers! Created by the world-renowned Royal Shakespeare Company, this four-time Tony Award-winning magical musical, still running in London’s West End, is sure to marvel and entertain Muny audiences.