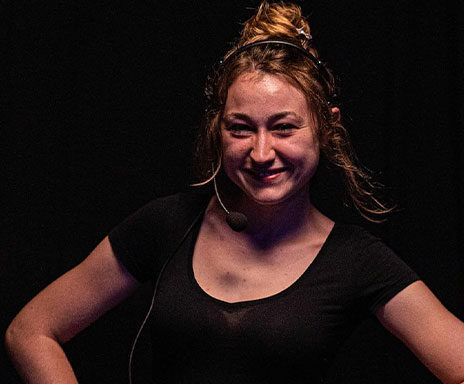 is a stage manager living in New York City. Her most recent stage management credits include A Sign of the Times (LDK Productions), Paint Your Wagon (The Muny), All Our Children (Sheen Center), Broadway Backwards (Broadway Cares), Significant Other (JCC Manhattan) and Million Dollar Quartet (Tuacahn Center for the Arts). She has also worked as a production assistant on a national tour of Jesus Christ Superstar, as well as a new musical workshop with Davenport Theatrical Enterprises. She feels very lucky to have started her career in St. Louis with Winter Opera St. Louis, Upstream Theater and of course, as a production assistant at The Muny! 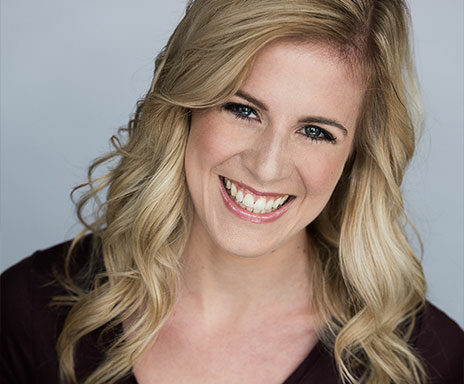 is a choreographer and educator based in New York. Her work has been seen on stages and screens across the globe. Beth’s extensive list of credits range from Broadway, Off-Broadway, national tours and Tony Award-winning regional houses to Target and renowned fashion house Gucci.

In July 2021, she will return to The Muny to choreograph The Sound of Music, after previously choreographing their award-winning production of Matilda. Beth also recently set the original Jerome Robbins’ choreography for West Side Story at the Abilene Opera.

Her additional choreographic work on Broadway and off-Broadway includes Gettin’ the Band Back Together; Jerry Springer the Opera, High Button Shoes, The New Yorkers and 1776. She virtually mounted How to Succeed in Business Without Really Trying at the Tokyu Theatre Orb during the summer of 2020, starring Japanese pop sensation Takahisa Masuda. Regionally, her work includes Footloose and The Music Man at The Kennedy Center, Because of Winn Dixie and The Drowsy Chaperone at Goodspeed Opera House, Jerome Robbins’ Broadway; Newsies and My Fair Lady at The Muny, Disney’s Beauty and the Beast and Jerome Robbins’ Broadway at Houston’s Theatre Under the Stars. She worked with Target to launch their “20 Years of Design for All” campaign for New York Fashion Week, as well as the highly stylized “Gucci Showtime” campaign in Los Angeles. As a performer, Beth has been seen on Broadway, in national and international tours, at top regional theaters, in short films, on Saturday Night Live and The Tonight Show Starring Jimmy Fallon.

She is currently a full-time faculty member for the Jazz and Contemporary Trainee Program at the prestigious Joffrey Ballet School in New York. She graduated with honors with her BFA from NYU Tisch School of the Arts. She is a proud member of SDC and AEA. 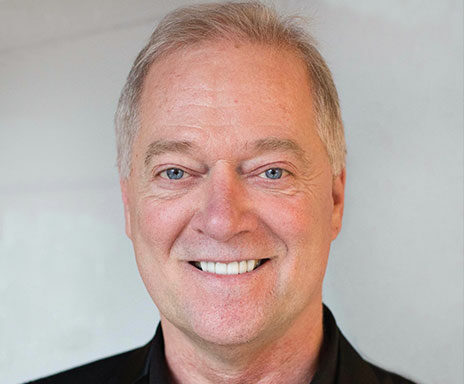 began his studies as a concert pianist studying in Louisville throughout his young adult life. He attended the prestigious summer Tanglewood Festival and continued his studies at the San Francisco Conservatory of Music. He has worked in San Francisco as a rehearsal pianist, vocal coach, musical director and conductor. In 1994, he began working as a music director at the Muny, where he conducted more than 50 productions. In 2013, he was appointed Music Supervisor and continues in that role today. Michael is on staff at the San Francisco Conservatory of Music working within the opera department where he musical directs the Broadway show each semester. He is also on staff at Webster University teaching Applied Piano for the Music Directing students. On Broadway, he has played keyboards in the pit for several productions and conducted Chicago after touring the first national tour with Chita Rivera and Ben Vereen. Among his other notable national tours are White Christmas (for the past 10 years), Thoroughly Modern Millie, 42nd Street, Seven Brides for Seven Brothers and Cinderella. Solo concerts include music directing and playing piano for Lee Roy Reams, Judy Kaye, Luci Arnaz, Shirley Jones, Karen Mason and Tovah Feldshuh. Vocal direction credits include the Christmas concert series for the Detroit Symphony, National Symphony and Birmingham Symphony Orchestras with maestro Jack Everly. Nationally, his work as a music director includes Kansas City Starlight, Theatrezone, Naples, Fla, Pioneer Theatre, Salt Lake City, Music Theatre Wichita, North Carolina Theatre, Paper Mill Playhouse, Milburn, NJ, Guthrie Theatre, Minneapolis and Theatre Under The Stars, Houston. He spent six months in Tokyo creating and music directing the dance musical Bryant Park which played in Tokyo and Kobe.

is an advocate, educator and professional stage manager with a career that spans many genres, including Broadway, Television, Cirque Du Soleil and Opera. On Broadway, he has worked as a full time and substitute stage manager on 12 productions, most recently serving as the Production Stage Manager for Freestyle Love Supreme. TV: 2019 Tony Awards, 2020 and 2019 MTV VMAs, Jesus Christ Superstar Live!; Hairspray Live!; The Wiz Live! Cirque du Soleil: OVO, Wintuk. Off- Broadway/NY: Porgy and Bess (Metropolitan Opera – assistant stage director), Candide (Carnegie Hall), five productions with NY City Center Encores!, The Public Theatre, Atlantic Theatre Company, 2nd Stage, Transport Group, Pearl Theatre Company. Selected Regional: Lempicka at Williamstown Theatre Festival, The Kennedy Center, The Muny, TUTS, Stages St. Louis, Kansas City Rep, Alley Theatre, Repertory Theatre of St. Louis. In addition to his production credits, he is currently adjunct faculty at New York University and Columbia University. As an advocate for change and equity, Cody has appeared live on CNN and has been interviewed on WNBC. Cody was also recently named one of Variety Magazine’s 2020 Broadway Players to Watch and has just launched The Cody Renard Richard Scholarship Program in partnership with Broadway Advocacy Coalition. He holds a BFA in Stage Management from Webster Conservatory and is a proud member of Actors’ Equity Association and the Directors Guild of America. www.codyrenard.com @codyrenard 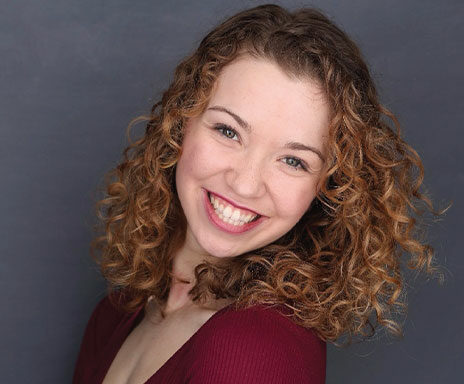 is a performer, choreographer, educator, and forever student living in NYC. This summer she was the director/choreographer for The Muny Virtual Kids Troupe 2020. She recently performed in the reading of Wanderer that is heading to Papermill Playhouse’s 2021 season. She has been seen on stage at The Goodspeed Opera House, Theater Under the Stars, The Rev and Arena Stage (Washington DC). As a choreographer, she has worked as an associate for The Tonight Show with Jimmy Fallon, Saturday Night Live, Hermès Huereka Fashion week and events for the Robin Hood Foundation and Target. She has taught at schools, studios and theaters around the country and all over Zoom! Gabi is a proud member of AEA and the #MSAfam. She received her BFA in Musical Theatre from Pace University with a minor in Commercial Dance. www.gabistapula.com 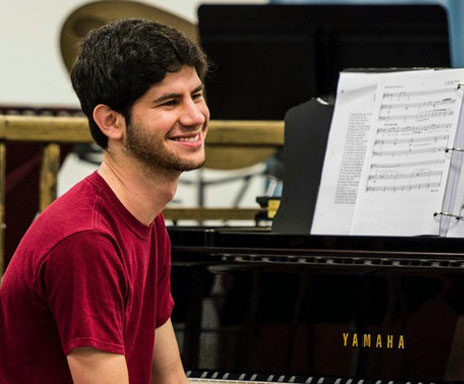 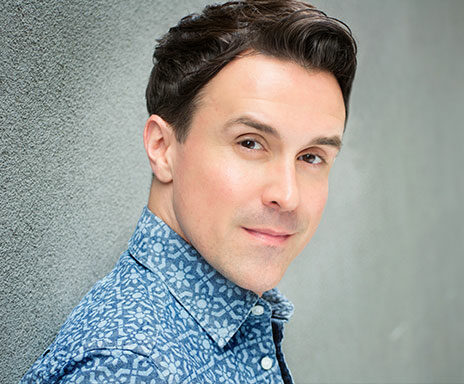 was the Associate Director/Associate Choreographer for the Tony nominated Broadway revival of Ragtime and most recently was the choreographer for Disney+’s Encore!; His director/choreographer credits include A Chorus Line (Maltz Jupiter Theatre, Merry-Go-Round Playhouse and Theatre Memphis), Legally Blonde (Merry-Go-Round Playhouse), On the Town (Capital City Theatre), The Rocky Horror Show (University of Buffalo) and the rock opera Fallen Angel (New York International Fringe Festival), which won Best Musical. Other credits include various productions at the Kennedy Center, The Muny, Sacramento Music Circus, Signature Theatre, Drury Lane Theatre, Bay Street Theater, Riverside Theatre, Gateway Playhouse, Actors Theatre of Louisville, Des Moines Metro Opera, Theatreworks USA, Tisch School of the Arts, D.A.R.E., Shenandoah Summer Music Theatre and Morag Productions for the Seabourn Sun Cruise Ship. He received an honorable mention for direction and choreography at the New York Musical Theatre Festival for his production of All Is Love, A New Dance Musical. As a performer, Josh has been seen in the Broadway revivals of 42nd Street, La Cage aux Folles, A Chorus Line and Ragtime, as well as the off-Broadway productions of Cagney and The Awesome 80’s Prom. Josh graduated from New York University’s Tisch School of the Arts with a BFA in Drama.