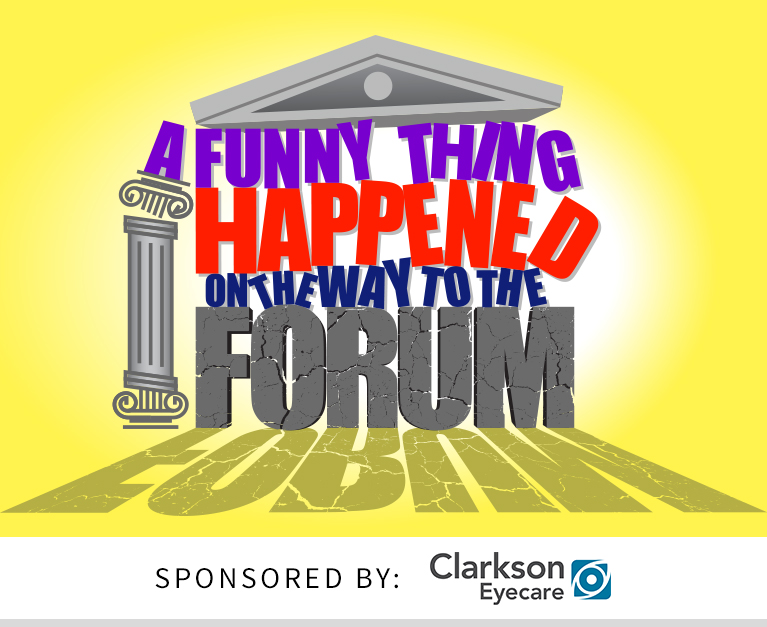 A Funny Thing Happened on the Way to the Forum

Load up the chariots, we are off to The Muny for big, big laughs! Considered one of Broadway’s greatest farces, this musical romp through Rome includes desperate lovers, mistaken identities, scheming neighbors and secrets behind every toga. With delicious music and lyrics by Stephen Sondheim, this is one hair-brained Roman forum you won’t want to miss!

SUMMARY
A Funny Thing Happened on the Way to the Forum tells the bawdy story of a slave named Pseudolus who schemes to win the heart of the beautiful virgin, Philia, for his young master, Hero. In exchange, Hero will grant Pseudolus his freedom once and for all. However, things are never as easy as they seem. Chaos ensues with hair-brained schemes, cases of mistaken identity, slamming doors and convoluted plot twists. The show’s comedy draws on sexual innuendo.

In the song “Bring Me My Bride,” Miles Gloriosus sings about his military conquests in a somewhat graphic manner.

The mature ideas in the show are played in a comedic style.

The character, Lycus, runs a brothel.

The courtesans do comical, suggestive dances and the main character, Philia, is a virgin courtesan.

is honored to be back at The Muny so soon, having played Scuttle in Disney’s The Little Mermaid. He is probably best known for portraying Mike Costa in the Broadway revival of A Chorus Line. Other Broadway: Fiddler on the Roof, Nice Work If You Can Get It, The Pajama Game, Wonderful Town, Beauty and the Beast, Guys and Dolls, The People in the Picture and Anything Goes. TV/Film: The Good Fight, BrainDead, Elementary, Boardwalk Empire, EDtv, and his own projects (writer & star) Farm Girl in NY and Tyco Parks the Car. In his spare time (HA!), Jeff is a father of two, husband to one and the artistic director and owner of I Can Do That NYC: Dance & Theatre classes for all ages! @sheckysheck www.icandothatnyc.com

Broadway: On the 20th Century, You Can’t Take It With You, Relatively Speaking, Losing Louie, A Year with Frog and Toad (Toad), A Funny Thing Happened… (Hysterium), Laughter On The 23rd Floor, Face Value, Doonesbury. NY City Center Encores!: The Pajama Game. NY Shakespeare Festival: All’s Well That Ends Well, Othello, The Death of Von Richthofen…, The Laundry Hour, Alice In Concert. Off­Broadway: Almost An Evening, Chesapeake (Drama Desk and OCC nominations), A Flea In Her Ear, The Miss Firecracker Contest. Film: Manhattan, My Favorite Year, Noises Off, How Do You Know. TV: Perfect Strangers, Showtime’s Laughter on the 23rd Floor, Bluebloods, The Good Fight, The Good Wife, Law & Order, Law & Order: CI, Miami Vice, Moonlighting and others. Mr. Linn Baker is a co-founder/co-director of New York Stage and Film.

is so pleased to be invited back to The Muny, where he played Bert Barry in last season’s 42nd Street. Broadway credits include The Drowsy Chaperone, Sly Fox and Relatively Speaking (an evening of one acts by Ethan Coen, Elaine May and Woody Allen). Recent NY: Hector in The Golden Apple (City Center Encores!). TV: ADA Richard Bay on ABC’s The Practice. Other credits include: Unbreakable Kimmy Schmidt, The Mick, Major Crimes, Madam Secretary, The Blacklist, Madoff, Curb Your Enthusiasm, Smash, Masters of Sex, Everybody Loves Raymond and the upcoming Disjointed. Creator/performer of “Off the Top!” – a solo, completely improvised cabaret, which heads to the Edinburgh Fringe Festival August. www.offthetop.nyc

played Maria in The Muny’s 2013 production of West Side Story and is thrilled to return to St. Louis! She is currently playing Christine in The Phantom of the Opera on Broadway. Other credits include: Les Misérables (Cosette, Broadway revival), The King and I (Lincoln Center, Broadway revival), West Side Story (Maria, Broadway revival 1st national tour). Off-Broadway: The Fantasticks (Luisa). Other credits include: Lyric Opera of Chicago’s The King and I (Tuptim), McCarter Theatre’s A Christmas Carol (Fan/Mrs. Bonds) and concerts at Feinstein’s/54 Below, Alice Tully Hall, Carnegie Hall and The Town Hall. TV/Film: The Michael J. Fox Show, Yield and Drama: The Web Series. Ali has a B.A. in psychology from Yale University. www.aliewoldt.com

is delighted to return to The Muny, where he was last seen in Footloose (Cop and Cowboy Bob’s Quartet). Other Muny shows include Breakfast at Tiffany’s (Oscar) and South Pacific (Stewpot). Earlier this year, Whit appeared in To Kill a Mockingbird (Judge Taylor) at The Repertory Theatre of St. Louis and The Winter’s Tale (Old Shepherd) at The Shakespeare Festival of St. Louis. A familiar face to St. Louis, he has been seen at Stages, The Black Rep, Variety Children’s Theatre, Shakespeare Festival of St. Louis, The Actor’s Studio, Upstream Theater, 27 shows at The Rep and a new show this fall at Insight Theatre Company. Regionally, Whit has appeared in Anything Goes (Moonface Martin, Kansas City Starlight Theatre); Here’s Love (Kris Kringle, Fireside Theatre); Inherit the Wind, The Crucible and Most Happy Fella for Cincinnati Playhouse in the Park; The Fantasticks (Hucklebee, Riverside Theatre); world premiere of Monk-y Business (Abbot Costello, Grand 1894 Opera House); The Music Man (Mayor Shinn, Casa Manana); 1776 (Ben Franklin), Sunshine Boys (Al Lewis), Sugar (Osgood Fielding) and Harvey (Dr. Chumley) for Arrow Rock Lyceum Theatre.

is excited to be back at The Muny. Previous productions were Aladdin and Mary Poppins (Dance Captain). Off Broadway: Where’s Charley? and Fiorello! (NY City Center Encores!) The Little Mermaid (Alabama Shakespeare Festival, Dance Captain) and American Dance Machine for the 21st Century (Dance Captain). Tommy has also been a principal dancer with Parsons Dance, dre.dance, Kristin Sudekis Dance, Nicholas Andre Dance and marInspired. Most recently, he has been archiving the works of the late Bob Fosse with the Verdon Fosse Legacy LLC. He is a Florida native and received a BFA in dance from Ohio State University. Proud AEA member since 2011.

has directed The Muny’s productions of Fiddler on the Roof (2016), Into the Woods (2015), Mary Poppins (2013) and Aladdin (2012). On Broadway, he directed Honeymoon in Vegas, The Apple Tree and The Color Purple. Gary is associate artistic director of Chicago Shakespeare Theater, where he has directed King Charles III, Road Show, Sunday in the Park with George, Follies, Amadeus, Passion and Pacific Overtures. Gary directed West Side Story, Evita, Antony and Cleopatra and A Little Night Music for the Stratford Festival of Canada. Recent credits include: Hands to God (Victory Gardens Theater), Moonshine (Dallas Theater Center), Road Show (Signature Theatre) and Parade (Avery Fisher Hall). He has received 10 Joseph Jefferson Awards for Direction and the Artistic Excellence Award from the League of Chicago Theaters.

Muny: Fiddler on the Roof (2016), Into the Woods (2015), South Pacific (2013), The King and I (2012) and Gypsy (2006). Broadway: An American in Paris, Mary Poppins, Lestat and Il Divo – A Musical Affair. National tour: The Lion King. Music direction and orchestrations for Daddy Long Legs, most recently off-Broadway as well as in London, Tokyo, Seoul and 17 US productions. International: Sousatzka (Toronto), An American in Paris (Paris), Honk! (Singapore and Philippines), Jane Eyre (Tokyo). Other collaborations with director Gary Griffin include Chicago Shakespeare Theater’s Follies (Jeff Award for music direction), Sunday in the Park with George (Jeff nomination); orchestrations for New York and Boston Pops, National Symphony and L.A. Philharmonic. Graduate of Northwestern University and a native of Chicago.

returns to The Muny, where she previously designed Disney’s Aladdin. Based in Chicago, she has designed numerous productions for Goodman Theatre, Steppenwolf Theatre Company, Chicago Shakespeare Theater, Court Theatre, Writers Theatre and Lookingglass Theatre Company, where she is an ensemble member. She has designed for regional theatres all across the country and internationally, including Canada, the UK, Italy, France, Australia and Japan. New York credits include Rusalka, Lucia di Lammermoor and La sonnambula for The Metropolitan Opera, The Glorious Ones for Lincoln Center Theatre and Mary Zimmerman’s Tony award-winning Metamorphoses (Circle in the Square, Second Stage). She is the recipient of the 2012 Michael Merritt Award, four Joseph Jefferson Awards and was honored with nominations for two Drama Desk Awards and London’s Olivier Award.

is thrilled to be back for his sixth season at The Muny. Select Muny designs include: 42nd Street, Young Frankenstein, Fiddler on the Roof, Hairspray, Into the Woods, and Seussical. Other regional design credits include: Thoroughly Modern Millie (Goodspeed Musicals), A Christmas Carol and All the Way (Repertory Theatre of St. Louis), Erma Bombeck: At Wits End (Arena Stage), Sunset Baby and The Call (TheaterWorks), White Guy on the Bus (59E59), Because of Winn Dixie and The Explorers Club (Delaware Theatre Company), Children of Eden (The Kennedy Center), Blue Sky Boys (Capital Repertory Theatre), Die Fledermouse (New Orleans Opera), The Barber of Seville (Opera San Antonio). Upcoming lighting designs include: Carmen (Minnesota Opera), Daughter of the Regiment (Atlanta Opera). www.rdentex.com

Broadway: Holler If Ya Hear Me, Soul Doctor. US tours: Flashdance, Mamma Mia!; Joseph and the Amazing Technicolor® Dreamcoat. Regional: The Muny – 2015 and 2016 seasons, First Wives Club, Harmony, The Nutty Professor, Emma, Robin and the 7 Hoods, Sammy, Ace, Beauty and the Beast, Singin’ in the Rain, Sweeney Todd, Miss Saigon. Off-Broadway: Gigantic. International tours: Das Wunder von Bern. Associate sound design: Paramour, Kinky Boots, Hugh Jackman: Back on Broadway, Leap of Faith, Bonnie & Clyde, We Will Rock You, Sister Act, Come Fly Away, 9 to 5, The Little Mermaid, Mamma Mia!; Tarzan, Cat on a Hot Tin Roof and In My Life. David is a recipient of the Kevin Kline and Suzi Bass awards for Outstanding Sound Design of a Musical.

This is John’s 4th season at The Muny. He is the head of hair and makeup for Webster University’s Conservatory of Theatre Arts, as well as the Wig Master for The Repertory Theatre of St. Louis. He is a graduate of the Conservatory and has been associated with the Rep for a number of years. As a freelance designer, he has worked throughout Missouri, Illinois, Minnesota and New York. Some companies include Opera Theatre of Saint Louis, The Muny, Stages St. Louis, Arrow Rock Lyceum Theatre, Great River Shakespeare Festival and the Merry-Go-Round Playhouse.