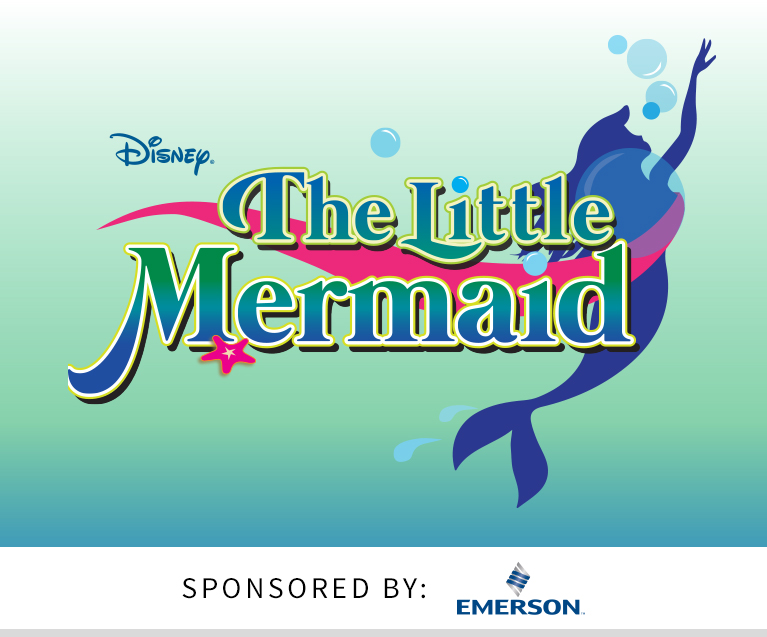 PART OF YOUR WORLD

Go “under the sea” in Disney’s classic musical fantasy The Little Mermaid. One of the most popular animated films in history is now a splendid and magical Broadway musical. Headstrong Princess Ariel dreams of a life on land far from her ocean home, and she’s willing to risk her Father’s love and wrath to find it. Featuring Academy-Award winning hits like “Part of Your World,” “Under the Sea” and “Kiss the Girl,” this spectacular Muny production will leave your entire family happy as a clam.

SUMMARY
Ariel, King Triton’s youngest daughter, wishes to pursue the human Prince Eric in the world above, bargaining with the evil sea witch, Ursula, to trade her tail for legs. But the bargain is not what it seems, and Ariel needs the help of her colorful friends, Flounder the fish, Scuttle the seagull and Sebastian the crab to restore order under the sea.

The Little Mermaid is geared toward children and appropriate for all ages. Scenes involving Ursula and her “magic” may be scary for young children, but this is also true of the popular Disney movie. It features Academy Award-winning songs “Under the Sea,” “Kiss the Girl” and “Part of Your World,” along with many new tunes written for the stage version.

In adapting the film into a live stage musical, several significant changes were made. The storm at sea is simplified, and Eric merely falls overboard. His sheepdog, Max, is not included.

Ursula’s nautilus shell embodies her power and she uses the shell to spy on Ariel, while in the film she used Flotsam and Jetsam for that purpose. Ursula’s alter ego, Vanessa, is not included, which omits Ursula’s scheme of Eric’s brainwashing. At the ball, a singing contest is held to win Eric’s heart. In the musical, Ariel defeats Ursula by destroying the nautilus shell.

The word hell is used once.

The musical contains the same dramatic scenes with the villain, Ursula, as the Disney movie.

is a Swedish-American actress who began her career in Los Angeles. She spent her teenage years playing Maris Bingham on Nickelodeon’s teen sitcom Unfabulous and originated the role of Kendra in Jason Robert Brown’s musical 13, for which she received a Los Angeles Drama Critics Circle Award. She was later nominated for LA’s Ovation Award for her portrayal of Elle Woods in Legally Blonde, which she has performed in six productions across the country. While completing her bachelor’s degree at UCLA, she starred in shows at the Pasadena Playhouse as well as Tuacahn Amphitheatre. TV/Film: The Big Bang Theory, Hannah Montana, Life, Samantha Who and The Curious Case of Benjamin Button. Other theater work: The Little Mermaid, Legally Blonde, Footloose, Xanadu, A Chorus Line and Sleeping Beauty.

is an actor and teaching artist born and raised in Brooklyn, NY. Broadway: Bring It On The Musical (Randall, original Broadway and touring companies), Spider-Man: Turn Off the Dark (Peter Parker/Spider-Man). TV: Peter Pan Live! (Tootles/Lost Boy). Regional: Freaky Friday (Adam, world premiere) at the Signature Theatre, A Bronx Tale (Calogero, world premiere) at the Paper Mill Playhouse, Into the Woods (Jack), Mamma Mia! (Sky) at The Muny, among others.

is thrilled to be making his Muny debut.  He is probably best known for portraying Mike Costa in the Broadway revival of A Chorus Line. Other Broadway: Fiddler on the Roof, Nice Work If You Can Get It, The Pajama Game, Wonderful Town, Beauty and the Beast, Guys and Dolls, The People in the Picture and Anything Goes. TV/Film: The Good Fight, BrainDead, Elementary, Boardwalk Empire, EDtv, and his own projects (writer & star) Farm Girl in NY and Tyco Parks the Car. In his spare time (HA!), Jeff is a father of two, husband to one and the artistic director and owner of I Can Do That NYC: Dance & Theatre classes for all ages! @sheckysheck www.icandothatnyc.com

is excited to join this amazing cast and production. His past Muny experience includes The King & I, South Pacific (Jerome), Tarzan (Young Tarzan), Shrek, Spamalot, Seussical, Disney’s Beauty and the Beast (Chip), The Wizard of Oz and The Music Man. Thanks to Mike and Megan for this opportunity!

Returns to The Muny after choreographing The Buddy Holly Story in 2015. Directed/choreographed The Rocky Horror Show for The University of Buffalo, Legally Blonde for Merry-Go-Round Playhouse, A Chorus Line for Maltz Jupiter Theatre and Theatre Memphis, and the rock opera Fallen Angel in the New York International Fringe Festival. He has also choreographed for Signature Theatre, Sacramento Music Circus, DOONCE Productions, Actors Theatre of Louisville, the Gateway Playhouse and Morag Productions for the Seabourn Sun Cruise Ship. On Broadway, Josh was the associate director/associate choreographer for the rival of Ragtime. As a performer, he has been in Broadway revivals of 42nd Street, La Cage aux Folles, A Chorus Line and Ragtime.

The Muny: The Music Man, 42nd Street, Oklahoma!; Into The Woods, Hello, Dolly!; The Addams Family, Mary Poppins, South Pacific and The King and I. Sets for the musicals Phantom and Marie Antoinette for EMK Productions in Seoul, South Korea; the world premiere of Nobody Loves You and of the new Duncan Sheik/Kyle Jarrow musical Whisper House at San Diego’s Old Globe Theatre as well as several musicals by Joe Iconis: Bloodsong of Love at Ars Nova, ReWrite at Urban Stages, The Black Suits at the Public Theater, The Plant That Ate Dirty Socks for Theatreworks USA, Things To Ruin at both the Zipper Factory and Second Stage. Recent credits include the critically acclaimed productions of Show Boat, Annie Get Your Gun, 1776, Big River and Camelot for Goodspeed Musicals, Barnum for the Asolo Rep’s 50th anniversary season, national and international tours of James Taylor’s One Man Band. www.msportfolio.com

is extremely happy to be back to The Muny, especially since she grew up across the river, in Highland, Illinois, and enjoyed many shows here in her youth. Previous Shows at The Muny include Beauty and the Beast, Pirates!; The King and I, Joseph… Dreamcoat, and last season’s Aida. New York credits include designs for the Roundabout Theatre, the Irish Repertory Theatre, the York Theatre, the Cherry Lane Theatre, the Little Shubert Theatre, the American Globe Theatre, the New York Fringe Festival and the New York Musical Theatre Festival. Regional credits include designs at the Maltz Jupiter Theatre, Goodspeed Opera House, SeaWorld Orlando, Palm Beach Drama Works, Arizona Broadaway Theatre, the Gulfshore Playhouse, John Engeman Theater, Arizona Broadway Theatre, the Des Moines Metro Opera, and clown costumes for Ringling Brothers and Barnum and Bailey Circus. Proud Union Member of USA 829. www.rlmcgeedesign.com

Broadway: Holler If Ya Hear Me, Soul Doctor. US tours: Flashdance, Mamma Mia!; Joseph and the Amazing Technicolor® Dreamcoat. Regional: The Muny – 2015 and 2016 seasons, First Wives Club, Harmony, The Nutty Professor, Emma, Robin and the 7 Hoods, Sammy, Ace, Beauty and the Beast, Singin’ in the Rain, Sweeney Todd, Miss Saigon. Off-Broadway: Gigantic. International tours: Das Wunder von Bern. Associate sound design: Paramour, Kinky Boots, Hugh Jackman: Back on Broadway, Leap of Faith, Bonnie & Clyde, We Will Rock You, Sister Act, Come Fly Away, 9 to 5, The Little Mermaid, Mamma Mia!; Tarzan, Cat on a Hot Tin Roof and In My Life. David is a recipient of the Kevin Kline and Suzi Bass awards for Outstanding Sound Design of a Musical.

graduated from the Conservatory of Theatre Arts at Webster University with departmental honors, earning a BFA in lighting design. Most recently he programmed video for Amelie at the Walter Kerr in New York. Select Muny credits include: 42nd Street, Young Frankenstein, Aida . Programming and associate credits include: Amelie (Walter Kerr Theatre), Joan of Arc (Public Theatre), Grounded (Alley Theatre), Skeleton Crew (Atlantic Theater), On Your Feet! (Marquis Theatre). He is delighted to be back in St. Louis and at The Muny for another fantastic season.

This is John’s 4th season at The Muny. He is the head of hair and makeup for Webster University’s Conservatory of Theatre Arts, as well as the Wig Master for The Repertory Theatre of St. Louis. He is a graduate of the Conservatory and has been associated with the Rep for a number of years. As a freelance designer, he has worked throughout Missouri, Illinois, Minnesota and New York. Some companies include Opera Theatre of Saint Louis, The Muny, Stages St. Louis, Arrow Rock Lyceum Theatre, Great River Shakespeare Festival and the Merry-Go-Round Playhouse.

This trio of “Head Chefs” blend style with engineering to create dynamic visual stories and characters. Since 2008, Emily DeCola, Eric Wright and Michael Schupbach have been designing, building, performing, directing and teaching puppetry in nearly every contemporary puppetry style from their workshop in downtown New York City. Some favorite recent projects and clients include the San Diego Zoo’s Centennial Celebration, The King and I and The Wiz (Maltz Jupiter Theater), Alice in Wonderland (New York City Opera), The Very Hungry Caterpillar Show (off- Broadway, UK tour, Australia tour), Compulsion (The Public Theater), and John Tartaglia’s ImaginOcean. Other collaborators include Disney Theme Parks, PBS, Mabou Mines, TheaterWorks USA, LG Electronics and the Disney Channel. PKP is dedicated to creating opportunities for everyone to interact with and advance the craft of puppetry by hosting workshops for all ages, fostering an apprenticeship program and creating original programming for all ages integrating puppetry, music, movement and storytelling.  puppetkitchen.com