It’s Comedy Tonight & Every Night This Week at The Muny

This week’s Muny production of A Funny Thing Happened on the Way to the Forum is a toga party in the park. It’s a Roman romp of silly characters running in, out and around three adjacent houses while they complicate the plot of the slave Pseudolus attempting to gain his freedom by helping his young master, Hero, win the affection of the virgin next door. Mistaken identity, satirical comments on social class, and wacky disguises fuel the plot that was inspired by the farces of the ancient Roman playwright Plautus (251-183 BC). 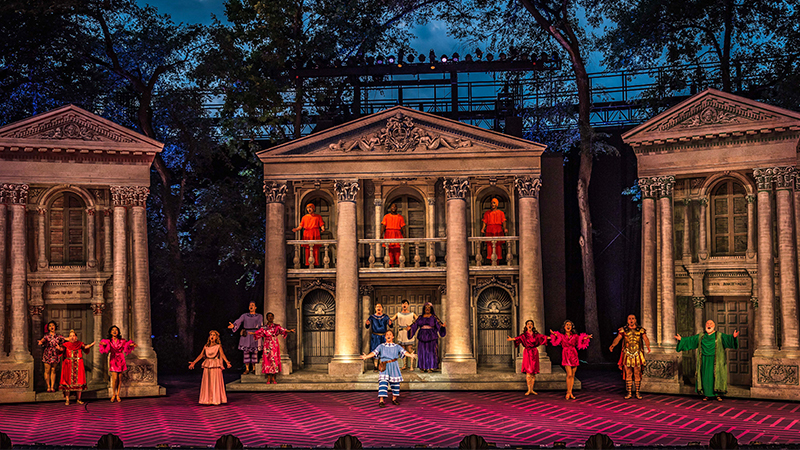 3 leading men in ForumNot only has this ancient Roman-inspired show survived the test of time since its Broadway debut in 1962, but this week it also survived losing its lead actor four days before opening night. Broadway and television veteran Peter Scolari was rehearsing in Forest Park for the lead role of Pseudolus when severe allergies hijacked his voice. He left the show and returned home. Without its star, the show still had to go on and it was up to Mike Isaacson (Artistic Director and Executive Producer) to find a suitable replacement. He called on Jeffrey Schecter who played Scuttle in The Muny’s The Little Mermaid and Schecter graciously agreed to take a redeye back to St. Louis and shoulder the gargantuan task of learning the role “for The Muny” during the remaining three days.

Opening night of A Funny Thing Happened on the Way to the Forum was a first for Muny-goers. Mike Isaacson came on stage before the show began and explained what had happened to Peter Scolari and that Jeffrey Schecter would be using a script during the show. Now, I’ve been going to The Muny for as long as “Forum” has been around and I’ve never seen an actor read from a script, but the audience understood and embraced Schecter for his courage and willingness to save the show. Besides that, he gave an excellent performance in a role that demands high energy, singing, dancing, and good comedic timing. It’s a huge role and the audience rewarded him well throughout the show and during the curtain call.

Schecter was given excellent support by John Tartaglia, who played Hysterium, Mark Linn-Baker (Senex), Jason Kravits (Lycus) and the entire cast. E. Faye Butler’s booming voice in the role of Domina perpetuated the maddening conflict on the stage. Nathaniel Hackmann (Miles Gloriosus) also unleashed his vocal prowess in the “Funeral Sequence.” And Ali Ewoldt’s beautiful voice in “Lovely” and “That’ll Show Him” made her an even more desirable Philia the virgin. They all worked together as a well-oiled machine and everyone in the cast seemed to breathe a sigh of relief when they took their final bows.

At the beginning of the show, Pseudolus announced, “We are here to honor the gods of comedy and tragedy.” Fortunately, it was “comedy tonight” from the opening number to the finale. Tragedy was diverted. The audience had as much fun as it ever had. Jeffrey Schechter saved the day. The gods are smiling on The Muny once again.