ST. LOUIS (March 7, 2019) – The Muny announced today that season tickets for their 2019 summer season will be available beginning at 9am Friday, March 8. Tickets can be purchased online at muny.org, by phone at (314) 361-1900, or in person at The Muny Box Office, open 9am-5pm, Monday through Friday. The Muny proudly begins its second century, celebrating 101 seasons in Forest Park this summer. 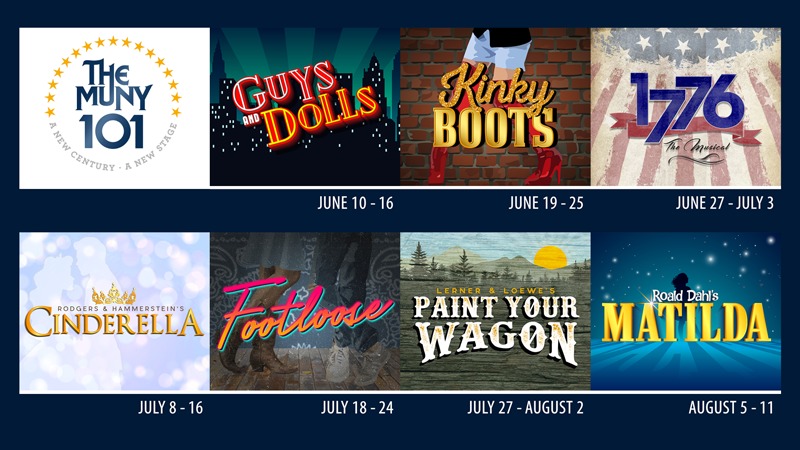 Considered by many to be the perfect musical comedy, Guys and Dolls gambles with luck and love during a time when Broadway was rampant with wise guys, mission girls and Lindy’s cheesecake. This all-time Broadway classic features a royal flush of a score, including “Luck Be a Lady,” “If I Were a Bell” and “Sit Down, You’re Rocking the Boat.” With this Muny favorite, everyone’s a winner!

“Step into a dream where glamour is extreme” with the U.S. regional premiere of the international smash-hit-musical Kinky Boots! Winner of six Tony Awards, the Olivier Award and the Grammy, this huge-hearted hit tells the story of a struggling British shoe factory that finds a surprising way to recreate themselves! Featuring 16 Grammy Award-winning original songs penned by pop icon Cyndi Lauper, this sparkling, stiletto sensation will “lift you up!”

With the American Revolution underway, a nation’s independence is ready to be claimed. The three-time Tony Award-winning 1776 sets ablaze the historic signing of the Declaration of Independence and illuminates the personalities, passions and compromises that created a nation. Featuring a telling score that includes “Sit Down, John,” “He Plays the Violin” and “Momma Look Sharp,” this Muny production will mesmerize, delight and inspire you.

A magical evening awaits, but mustn’t be late! This Rodgers and Hammerstein treasure began as one of the most-watched television programs in history and was finally produced on Broadway in 2013, receiving nine Tony Award nominations. With winsome charm and irresistible fantasy, the score features shoe-in favorites, including “In My Own Little Corner,” “The Prince is Giving a Ball” and “Ten Minutes Ago.” “It’s Possible” this timeless tale will have your heart soaring and prove, once and for all, dreams really can come true.

Kick off your Sunday shoes with this 80s favorite! Based on the 1984 Academy Award-nominated blockbuster hit, Footloose shows how a little teenage rebellion and a love of music can open hearts and transform a town. Featuring chart-topping hits, including “Let’s Hear It for the Boy,” “Holding Out for a Hero” and the Grammy-nominated title track “Footloose,” this four-time Tony Award-nominated dancing-sensation will have the entire family burning and yearning to cut loose!

Following the beloved productions of The Unsinkable Molly Brown and The Wiz, The Muny again serves as a birthplace to a reimagined version of an American musical classic. This Lerner and Loewe gem from 1951 is set in the California gold rush, sharing a moving tale of ambition, love and home. Featuring shimmering numbers such as “They Call the Wind Maria,” “I Talk to the Trees” and “Wand’rin’ Star,” this reimagined adaptation has a revised book by Jon Marans and is produced in association with On the Wagon Productions and Garmar Ventures.

MATILDA
SOMETIMES YOU HAVE TO BE A LITTLE BIT NAUGHTY!
MUNY PREMIERE!
Proudly Sponsored by Emerson
August 5 – 11

Inspired by the eccentric genius of internationally-acclaimed author Roald Dahl, Matilda shows how imagination is exactly what we all need to navigate life’s many challenges. When sent to a dismal boarding school, Matilda uses her clear eyes and keen smarts to help her discover her own surprising powers! Created by the world-renowned Royal Shakespeare Company, this four-time Tony Award-winning magical musical, still running in London’s West End, is sure to marvel and entertain Muny audiences.

Single tickets will be available beginning May 6. Muny gift cards for the 101st season are now available online and at The Muny Box Office. For more information, visit muny.org or call (314) 361-1900.