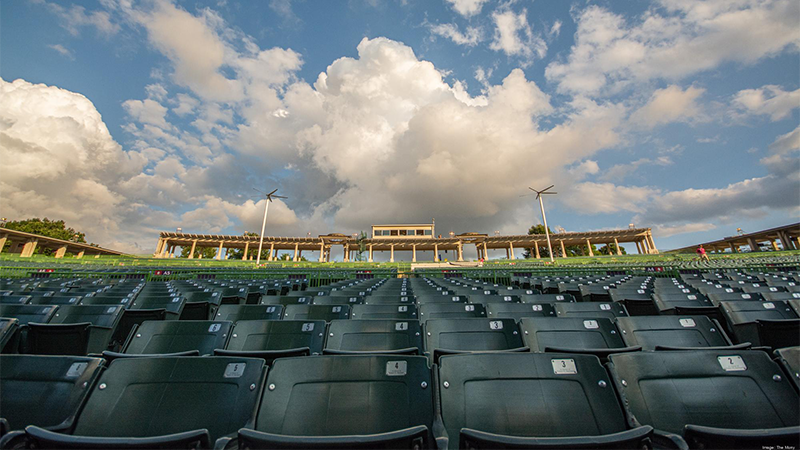 Ben E. King, The Coasters, Elvis Presley, Peggy Lee and The Drifters – what do they have in common? Besides being some of the most popular artists of the 50s and 60s, their hits, and over 35 others, are the bread and butter of Smokey Joe’s Cafe. Set in St. Louis’ historic Gaslight Square, Broadway’s longest-running musical revue includes Grammy Award-winning favorites such as “Yakety Yak,” “Jailhouse Rock,” “On Broadway” and “Love Potion No. 9.” With this generation-defining Muny premiere, audiences will be dancing in the aisles.

FIRST MUNY PRODUCTION IN A DECADE!

Considered by many to be the world’s most beloved musical, The Sound of Music reminds us that with high-spirited hope, heartfelt compassion and unwavering determination, life’s mountains can always be climbed. With its Tony, Grammy and Academy Award-winning score, including “Do-Re-Mi,” “My Favorite Things,” “Edelweiss” and the iconic title track “The Sound of Music,” the hills of Forest Park come alive once more!

Based on the Academy Award-winning 1954 film, Seven Brides for Seven Brothers is Americana at its finest. With an age-old tale of wooing and winning, the battle of the sexes and some barn-raising dancing, this western rollick features whistle-worthy favorites, including “Bless Your Beautiful Hide” and “Goin’ Courtin’.” With two of the most eminent dance scenes in musical theatre history and seven times the fun, saddle up for an unforgettable joyride through the Oregon frontier.

Based on the inspiring true story of the queen of Latin pop, Gloria Estefan and her husband, Emilio, On Your Feet! is a universal sensation that shows what can happen when two people believe in their talent, music and one another. Their moving rags-to-riches story features some of the most chart-topping songs of the past quarter-century, including “Rhythm is Gonna Get You,” “1-2-3,” “Coming Out of the Dark” and the title hit, “Get On Your Feet.” With this Muny premiere, audiences will leave ready to “Conga!”

New season subscriptions for the 2021 five-show season are still currently available through July 23, with single tickets available now. Tickets can be purchased online at muny.org or by phone by calling (314) 361-1900 ext. 1550.

Emerson is proud to be The Muny’s 2021 Season Sponsor.

The Muny’s mission is to enrich lives by producing exceptional musical theatre, accessible to all, while continuing its remarkable tradition in Forest Park. As the nation’s largest outdoor musical theatre, we produce world-class musicals each year and welcome over 350,000 theatregoers over our summer season. Celebrating 103 seasons in St. Louis, The Muny remains one of the premier institutions in musical theatre.