Season Update Announced - April 27, 2020
With careful and ongoing consideration, we are planning a late July season start date with the hope of presenting five of the seven productions we originally announced for our 2020 lineup. The remaining two productions are postponed until 2021. 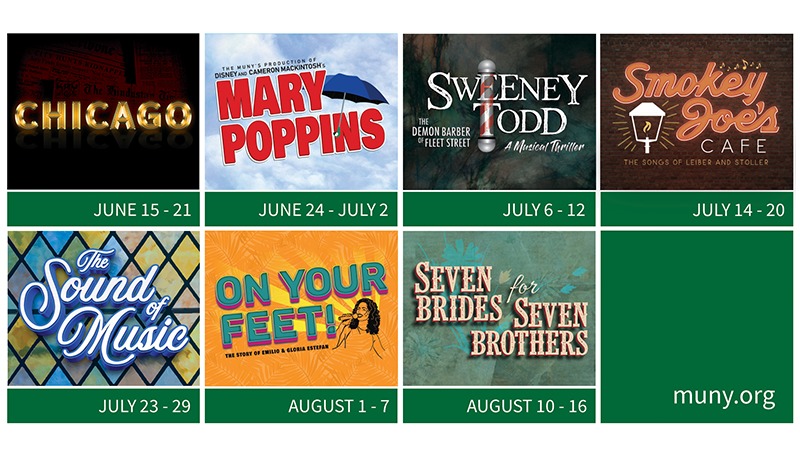 Includes Muny Premieres of Sweeney Todd and Smokey Joe’s Cafe, Midwest regional premiere of On Your Feet! and return of beloved favorites The Sound of Music and Disney and Cameron Mackintosh’s Mary Poppins

After a remarkable inaugural season of its Second Century, which welcomed more than 350,000 theatregoers, The Muny announced today its blockbuster seven show lineup for its 102nd Season.

"Our 2020 season continues the tradition of 'something for everyone' in St. Louis," said Muny Artistic Director and Executive Producer, Mike Isaacson. "These shows offer incredible variety, beauty, fun and drama, and we'll create with the fullness and power of our amazing new stage."

“After kicking off our Second Century with an ‘only at The Muny’ moment-filled 101st season, St. Louis has chosen a blockbuster lineup for 102,” said Muny President and CEO, Denny Reagan. “We expect this season to have a broad appeal with a mix of titles tailored specifically to what Muny-goers voted to see.”

Steward Family Foundation and World Wide Technology (WWT) became the first overall season sponsor in the history of The Muny in 2014. They are committed to continuing in this role with their leadership gift as The Muny’s 2020 Season Presenting Sponsor.

“Both Steward Family Foundation and WWT are committed to The Muny and to making exceptional musical theatre, accessible to everyone,” said David Steward, Chairman and Founder of WWT. “This year’s season promises to be spectacular and will showcase how much the performing arts enrich our community.”

New subscriptions will go on sale in March 9, 2020 and single tickets will be available beginning May 11, 2020.

Muny gift cards for the 102nd season are now available online and at The Muny Box Office.

The Muny’s mission is to enrich lives by producing exceptional musical theatre, accessible to all, while continuing its remarkable tradition in Forest Park. As the nation’s largest outdoor musical theatre, we produce seven world-class musicals each year and welcome over 350,000 theatregoers over our nine-week season. Celebrating 102 seasons in St. Louis, The Muny remains one of the premier institutions in musical theatre.