(October 3, 2016) - The third Muny Magic at The Sheldon, The Muny’s new bi-annual showcase of favorite Muny artists, will be November 16 and 17 at 7:30 p.m. at The Sheldon Concert Hall. The concert evening will feature four beloved and talented leading ladies from recent Muny seasons in song tribute to some of the legendary talents who have appeared on The Muny stage throughout its 98 year history. They’ll be singing songs sung by Muny legends such as Ethel Merman, Shirley Jones and Bernadette Peters. This production of Muny Magic at The Sheldon is proudly sponsored by Kenneth and Nancy Kranzberg.

The talented quartet will be: Danielle Bowen (Dorothy in The Wizard of Oz, 2016); Ali Ewoldt (Maria in West Side Story, 2013; currently starring as Christine in the Broadway production of Phantom of the Opera); Stephanie Gibson (Inga in Young Frankenstein, 2016); and Elena Shaddow (Marian in The Music Man, 2016; Cinderella in Into The Woods, 2015). The evening will be music directed by Brad Haak (Fiddler on the Roof, Into The Woods, South Pacific, The King and I). The evening is produced by The Muny’s casting director and producing associate Megan Larche Dominick. 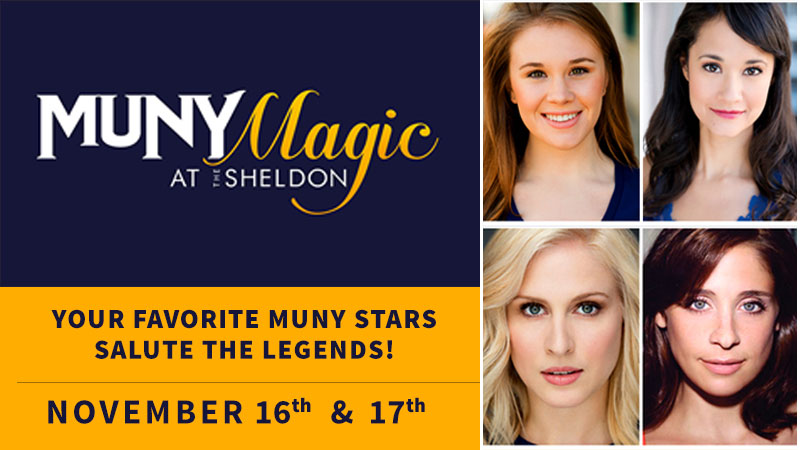 At the November 16th performance, Muny Artistic Director and Executive Producer Mike Isaacson will announce the line-up for The Muny’s highly-anticipated 2017 summer season.

“We’ve had such a great time with our first two ‘Muny Magic’ evenings,” said Isaacson. “How thrilling to welcome these four wonderful talents back and to have them pay tribute to some of the great artists who were on our stage before them.”

Following its thrilling premiere starring Tony award-winner Beth Leavel last November and The Buddy Holly Boys last April, this series will continue to welcome The Muny’s most beloved leading performers back for an intimate concert evening each fall and spring. The Muny Magic at The Sheldon series celebrates the performances and artistry of The Muny in its “off-season.”

“The ‘Muny Magic’ series is a great way for our audiences to reconnect with the stars they’ve fallen in love with in recent seasons,” said Muny President and CEO Denny Reagan. “The opportunity to welcome these four remarkable ladies back to St. Louis, for an evening that pays tribute to the stars that have come before them, will be an incredibly fitting and moving nod to the rich history of The Muny.”

DANIELLE BOWEN - Muny: The Wizard of Oz (Dorothy) Regional: North Shore Music Theatre’s The Wizard of Oz (Dorothy) and The Ivoryton Playhouse’s All Shook Up (Natalie, Connecticut Critics Circle Award). Additionally, she has performed concerts and cabarets at American Conservatory Theatre, The Venetian Room in San Francisco and the House of Blues in Boston. BFA in musical theatre from Emerson College. www.daniellebowen.com

STEPHANIE GIBSON - Muny: Young Frankenstein (Inga). Broadway: Gabrielle in Cinderella, as well as The Addams Family and Spamalot. Stephanie recently starred in the new musical Empire at the La Mirada Theatre. She was also recently seen in her sold out solo show debut at 54 Below titled Glitter, Goblets and Gatos. National tours: A Chorus Line (Judy) and Happy Days (Lori Beth). TV/Film: The Union, Are You Joking?, Person of Interest, Up All Night, All My Children, As…Turns, Guiding Light. Other: Anyone Can Whistle (Encores!), National Pastime (Bucks County Playhouse). Stephanie writes and co-stars in her original web series Dates, Mates and Clean Slates. www.datesmatesandcleanslates.com

BRAD HAAK - Muny: Fiddler on the Roof (2016), Into the Woods (2015), South Pacific (2013), The King and I (2012) and Gypsy (2006). Broadway: Music Director for An American in Paris, Disney’s Mary Poppins, Elton John’s Lestat; also Il Divo - A Musical Affair. First national tour of Disney’s The Lion King. Music direction and orchestrations for Daddy Long Legs, most recently off-Broadway as well as in London, Tokyo, Seoul and 17 US productions. International: An American in Paris (Paris), Honk! (Singapore and Philippines), Jane Eyre (Tokyo). Orchestrator for New York and Boston Pops, National Symphony and L.A. Philharmonic. Other: Follies at The Repertory Theatre of St. Louis. Graduate of Northwestern University and a native of Chicago.