Muny Magic at The Sheldon: My 70s Show

“My 70s Show!” A Night With Nicholas Rodriguez
March 29th and 30th at The Sheldon Concert Hall

(January 6, 2017) – The upcoming spring 2017 production of Muny Magic at The Sheldon will welcome popular Muny artist, Nicholas Rodriguez back to St. Louis for March 29th and 30th. 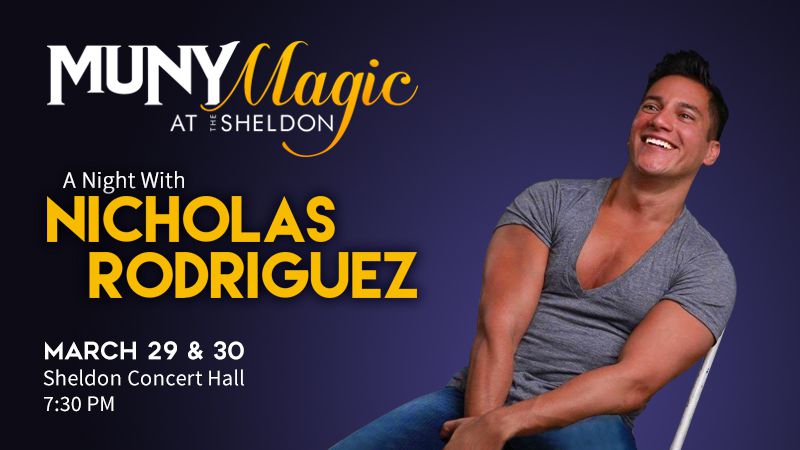 Nicholas most recently starred at The Muny as The Tin Man in the 2016 production of The Wizard of Oz. In 2015 Nicholas appeared in the two blockbuster hits of that summer season, starring as The Beast in Disney’s Beauty and the Beast and as Ritchie Valens in the electrifying production Buddy: The Buddy Holly Story. In 2014 he starred in the title role of Disney’s Tarzan.

My 70s Show! will fuse all things you love and remember about the 1970s with the music of Broadway, Bossa Nova, folk, and of course Disco in a unique and intimate evening filled with Nicholas’ charming personality and soulful voice. This two-night concert presentation will be held March 29th and 30th at 7:30 p.m. at The Sheldon Concert Hall, and is proudly sponsored by Kenneth and Nancy Kranzberg.

Nicholas is perhaps best known for the role of Nick Chavez on ABC’s One Life to Live for which he received the GLAAD Media Award and the 2009 Visibility Award. He recently debuted his solo show at the Orlando Cabaret Festival, and the Signature Theatre in Washington, D.C. to rave reviews.

“Outstanding! Top ten performances of the year” – The New Yorker

“He has a glorious voice — he understands melody, rhythm — it’s all in his body. He’s the classic leading man.” – Washington Post

"Nick is a consummate, passionate performer who inspires continual love from the Muny audience," said Muny Artistic Director and Executive Producer Mike Isaacson. "It will be so exciting to have him share more of his talents with us.”

Following its thrilling premiere 2015 - 2016 season starring Tony Award-winner Beth Leavel, and then The Buddy Holly Boys, the Muny Magic at The Sheldon series welcomed four of the most beloved leading ladies from recent Muny seasons back this past November for a moving and entertaining Salute to the Legends. The Muny Magic at The Sheldon series celebrates the performances and artistry of The Muny each fall and spring.

“The ‘Muny Magic’ series is a great way for our audiences to reconnect with the stars they’ve fallen in love with in recent seasons,” said Muny President and CEO Denny Reagan. “Nicholas has given some really incredible performances over the years and I’m personally very excited to welcome him back this spring. He’s an outstanding talent. I think we’re in for a real treat.”