Muny Steps into Second Century with Announcement of 101st Season 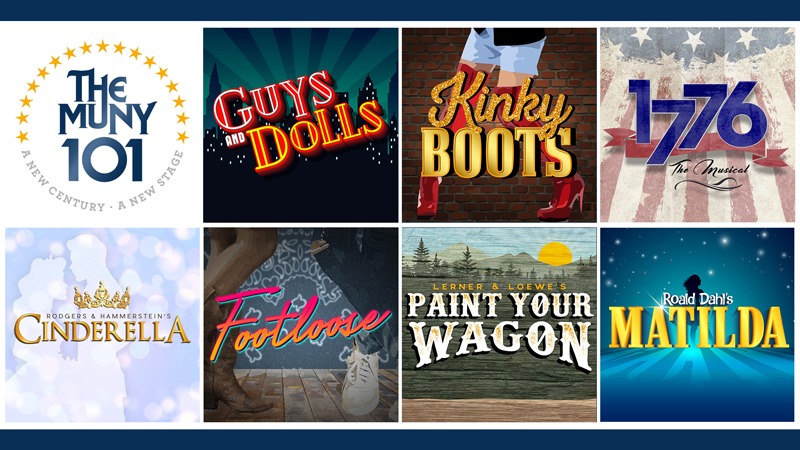 After an astonishingly epic centennial season which welcomed more than 400,000 theatregoers, The Muny announced today its dazzling, seven-show line-up for its 101st season.

The Muny will be the first theatre in the U.S. to produce the Tony, Olivier and Grammy Award-winning Best Musical Kinky Boots. In addition, Season 101 also includes two all-time beloved Muny favorites: Rodgers and Hammerstein’s Cinderella and Guys and Dolls. After 56 years, Muny audiences will see the return of Lerner and Loewe’s Paint Your Wagon, in a revised edition being developed at The Muny. Other season highlights include 80s dance-favorite Footloose, the powerful musical-telling of the signing of The Declaration of Independence, 1776, and The Muny premiere of the Tony and Olivier Award-winning Matilda.

Show order, performance schedule and audition dates will be announced later this fall. Subscription renewals will be mailed early December. New subscriptions will go on sale in March 2019, and single tickets will be available beginning May 2019.

“This is a thrilling, eclectic line-up that I believe will take the Muny audience on another great summer adventure,” said Muny Artistic Director and Executive Producer Mike Isaacson. “It’s a new century, and a new stage, and here we go. Gulp!”

“As the first season of our second century, this line-up is both ambitious and nostalgic,” said Muny President and CEO Denny Reagan. “On our brand new stage, the 2019 season promises the thrills and unforgettable Muny magic that have defined our theatre for over a century.”

“Both WWT and The Steward Family Foundation are committed to The Muny and to making exceptional musical theatre, accessible to everyone,” said David Steward, Chairman and Founder of WWT. “This year’s season promises to be spectacular and will showcase how much the performing arts enrich our community.”

Muny gift cards for the 101st season are now available online and at The Muny Box Office. For more information, visit muny.org or call (314) 361-1900.