The Muny announced today a remarkable pledge of $20 million from The JSM Charitable Trust for its Second Century Capital Campaign. This fundraising effort will fund major capital improvements, including a complete rebuild of the Muny stage, the support, maintenance and upkeep of the aging 11.5 acre campus, and the building of the theatre’s endowment, which supports The Muny’s ever-growing education and outreach programs.

“As one of the lead supporters of this campaign, James and Elizabeth McDonnell, through The JSM Charitable Trust, have once again set the tone for philanthropy in the St. Louis community and we are incredibly humbled and grateful to be on the receiving end of their generosity,” said Muny President and CEO Denny Reagan. “This gift helps secure a thriving future for The Muny and the generations of St. Louisans we will continue to serve.”

“There’s music and magic on that stage, but behind the scenes are dated technologies and a crumbling infrastructure that hold it all together,” said James S. McDonnell III, Trustee of The JSM Charitable Trust, Honorary Campaign Chair, Board Member and long-time supporter. “This is our chance to give a gift of great value to generations and secure the future of this civic institution for years to come.”

This announcement was part of The Muny’s official kick-off event, Intermission: Setting the Stage for the Next Act, for the upcoming stage renovation. Major donors were invited for an intimate evening onstage that included brief remarks regarding the Second Century Capital Campaign and the upcoming major renovations to the theatre. 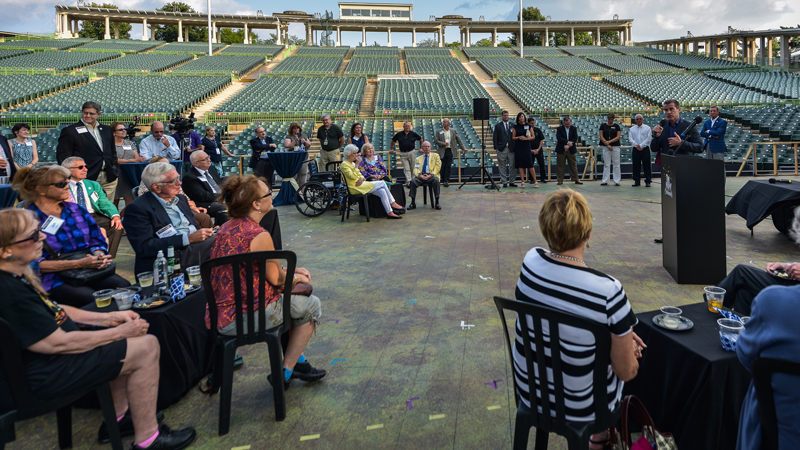