Meet Me In St. Louis has songs by Hugh Martin and Ralph Blane, a book by Hugh Wheeler and is based on “The Kensington Stories” by Sally Benson and the MGM motion picture “Meet Me in St. Louis.” This production will feature a revised book by Gordon Greenberg and new orchestrations by John McDaniel. 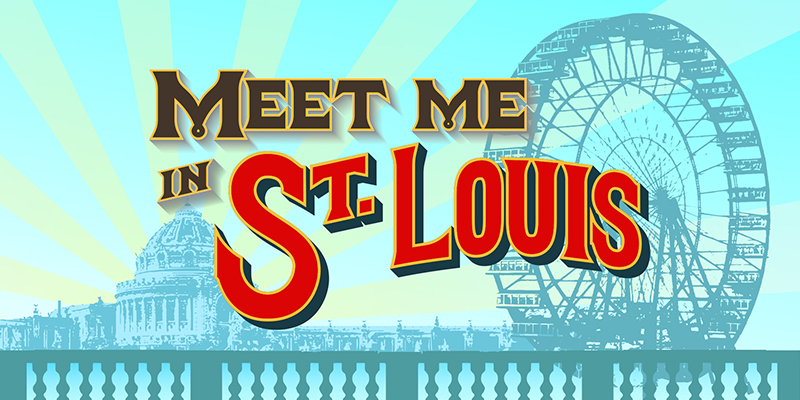 “How great to end our 100th season with a show and a story beloved by this community,” said Muny Artistic Director and Executive Producer, Mike Isaacson. “This is a fantastic company who will bring the Smith family and friends to thrilling and poignant life.”

As previously announced, Meet Me In St. Louis is directed by Marcia Milgrom Dodge and choreographed by Josh Walden with music direction by Charlie Alterman.

STEPHEN R. BUNTROCK (Mr. Alonso Smith) is incredibly excited to be back on the Muny stage after performing in Thoroughly Modern Millie as Trever Graydon and as Mr. Banks in Mary Poppins. Broadway: A Little Night Music (revival), starring as Fredrick Egerman, opposite Bernadette Peters. He played the same role in the show’s earlier run with original leading ladies, Catherine Zeta Jones and Angela Lansbury. Curly in Oklahoma!; Gaston in Beauty and the Beast, St. John in the original cast of Jane Eyre, Barrett in Titanic, Enjolras in the 10th Anniversary cast of Les Misérables, The Phantom in The Phantom of the Opera, Josephus Gage in Gentlemen Prefer Blondes (NY City Center Encores!) and Teen Angel for the latest revival of Grease. He has toured extensively across the United States and Canada as Rueben in Joseph and the Amazing Technicolor® Dreamcoat, starring Donny Osmond, originated the role of Arnaud du Thil in Cameron Mackintosh's Martin Guerre and The Phantom of the Opera. Stephen has enjoyed many concert appearances as well, most recently performing alongside Dame Julie Andrews in London with the Royal Philharmonic Orchestra.

KATHY FITZGERALD (Katie) comes to The Muny directly from 10 months as Mrs. Gloop on Broadway in Charlie and the Chocolate Factory. Muny credits: Pirates! (Ruth). Other Broadway credits: The Producers (Shirley Markowitz, original Broadway cast) starring Nathan Lane and Matthew Broderick, Swinging on a Star (Drama Desk nomination) 9 to 5 (Roz, Outer Critics nomination) with Allison Janney. Kathy has also appeared in over 2000 performances of Wicked on Broadway and the national tour as Madame Morrible (Broadway World Award). Off-Broadway: Damn Yankees (Doris, Encores!), Disaster! (Triad); Donnybrook (Irish Rep). Regionally, Kathy has worked at McCarter Theatre and the Goodspeed Opera House, to name a few. TV/Film: Smash, Mercy, One Life to Live, Curb Your Enthusiasm, The Next Three Days (with Russell Crowe), Our Idiot Brother and The Producers.

DAN DELUCA (John Truitt) is so happy to be back on the Muny stage after marrying into The Addams Family during the 2014 season as Lucas Beineke. He originated the role of Jack Kelly on the tour of Disney’s Newsies. Regional: Thoroughly Modern Millie(Jimmy, Goodspeed Opera House), Hair (Claude, Patchogue Theatre), Next to Normal(Gabe), Mamma Mia! (Sky, Weston Playhouse); Legally Blonde (Emmett, Lexington Theatre Company), How the Grinch Stole Christmas (Young Max, The Old Globe), Children of Eden (Cain/Japheth, CAP21). Other credits include: 54 Below, Joe’s Pub, Barrington Stage, Macy's Thanksgiving Day Parade and Radio City Music Hall. Dan serves as the Visual Director and Key Speaker for The Field Consulting specializing in Emotional Intelligence and Mindfulness.

ELLE WESLEY (Agnes Smith) Muny debut! She was last seen in the role of Ngana in the Stages St. Louis production of South Pacific.

ELENA ADAMS (Tootie Smith) Muny debut! Elena has performed in youth and community theatre since the age of five and was recently nominated by Arts for Life for Best Juvenile Performer in a Musical.

ABOUT THE SHOW:
Clang, clang, clang, we are off to The Muny! Based on the heartwarming 1944 MGM film, Meet Me In St. Louis paints a wholesome portrait of a turn of the century American family. Set in the summer of 1903, the Smiths eagerly await the grand opening of the 1904 World’s Fair. With hits such as “The Trolley Song,” “Have Yourself a Merry Little Christmas,” “The Boy Next Door” and the title number, this is the perfect finale to our 100th season, and will evoke nothing but love and pride…right here in St. Louis.