The Muny announced today the directors, choreographers and music directors for The Muny’s epic 2018 centennial season, which opens on June 11 with the first production in the world of Jerome Robbins’ Broadway since it’s Tony-award winning Broadway and national tour productions.

“How thrilling to approach our 100th season working with these extraordinary artists," said Muny Artistic Director and Executive Producer Mike Isaacson. "We know how excited everyone is by our 100th season, and we're ready to make the magic.” 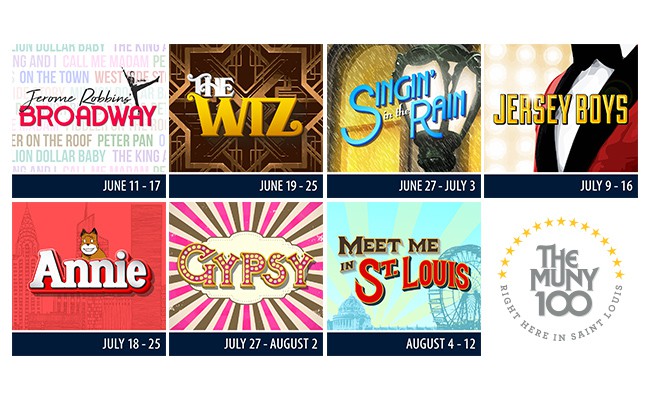 CHRIS BAILEY (Production Supervisor) returns to The Muny after directing and choreographing Newsies last year. Other Muny credits: The Music Man (2016), Into The Woods (2015), My Fair Lady (2015), Tarzan (2014), West Side Story (2013) and Thoroughly Modern Millie (2012). Chris also choreographed the historic opening number of the 2013 Tony Awards and served as assistant choreographer for the 2013 and 2014 Academy Awards. Chris was the associate choreographer for the Broadway revival of Evita, the Broadway productions of How to Succeed in Business Without Really Trying, Cry-Baby and Promises, Promises. In London’s West End, Chris choreographed The Entertainer with Kenneth Branagh and Assassins at the Menier Chocolate Factory. He was also an associate choreographer for Guys and Dolls, Evita, Once in a Lifetime and Candide. Additional credits include The New Yorkers and 1776 at NY City Center Encores!; and Because of Winn Dixie at Alabama Shakespeare Festival.

MICHAEL HORSLEY (Music Director) is the music supervisor for The Muny. In his 24 years with The Muny, some of the shows he has conducted include Newsies (2017), Mamma Mia! (2016), Buddy: The Buddy Holly Story (2015), Grease (2014), Mary Poppins (2013), Joseph and the Amazing Technicolor® Dreamcoat and Thoroughly Modern Millie (2012), 42nd Street (1996, 2009), Godspell, Irving Berlin’s White Christmas (2000, 2006), Damn Yankees (1998, 2010), Sleeping Beauty, Singin’ in the Rain and many more. National tours: Thoroughly Modern Millie, Chicago, Cinderella, Irving Berlin’s White Christmas and Seven Brides for Seven Brothers. Other regional: Roman Holiday (Guthrie Theater), On a Clear Day You Can See Forever (Music Theatre Wichita), Fiddler on the Roof (AMT San Jose), A Chorus Line (Pioneer Theatre Company), The Full Monty (North Carolina Theatre). He has also voice directed the Christmas Concert Series for the Detroit Symphony, National Symphony and Birmingham Symphony Orchestras. He is on staff as music director for the San Francisco Conservatory of Music.

THE WIZ
Adapted from “The Wonderful Wizard of Oz” by L. Frank Baum
Book by William F. Brown
Music and Lyrics by Charlie Smalls
Additional Dialogue by Tina Tippit

SINGIN’ IN THE RAIN
Screenplay by Betty Comden and Adolph Green
Songs by Nacio Herb Brown and Arthur Freed
Based on the classic Metro-Goldwyn-Mayer film, by special arrangement with Warner Bros. Theatre Ventures, Inc.

ROMMY SANDHU (Choreographer) returns to The Muny, where he served as associate director/choreographer on The Unsinkable Molly Brown (2017). In addition to working with Tony-winner Kathleen Marshall on Bells are Ringing and Applause (both at NYCC), as well as Diner the Musical at Delaware Theatre Company, he served as Tony/Drama Desk-nominee Dick Scanlan’s associate on Little Shop of Horrors. Across the country he’s directed and/or choreographed for Cleveland’s Playhouse Square, Tuacahn, and Geva Theatre Center, among others. In New York, his work has been seen on and off-Broadway at 54 Below, Peace Love and Cupcakes (NYMF 2017), multiple opening numbers for Broadway Cares and How Now Dow Jones (NY Fringe). As a performer he’s appeared on Broadway in Mary Poppins, Bombay Dreams, Oklahoma!; On the Town, Annie Get Your Gun, The Life and Menken/Ahren’s A Christmas Carol. Instagram @Rsand4. Twitter @newrom. www.RommySandhu.com

JESSICA HARTMAN (Choreographer) is thrilled to return for The Muny’s 100th after working on All Shook Up (2017), Mamma Mia! (2016), Hairspray (2015) and Seussical (2014). Broadway: Lysistrata Jones (associate choreographer), The Boy from Oz starring Hugh Jackman (assistant choreographer). Off-Broadway/NY credits: Elephant and Piggie’s We Are in a Play! (choreographer, New Victory Theatre), Universal Studios/The Wizarding World of Harry Potter (associate),Waterfall (associate), and Somewhere in Time (associate). Other choreography credits include: Norwegian Creative Studios/Oceania Cruise Lines (choreographer), Disney Jr. Dance Party (associate show director), How to Succeed in Business Without Really Trying (associate, Theatre Under the Stars), West Side Story (associate, Signature Theatre), and Next to Normal (choreographer, Baltimore Center Stage). Up next: Memphis at Theatre Under the Stars (choreographer). Jessica is the Artistic Director of Broadway Theatre Connection. BFA from Florida State University.

COLIN WELFORD (Music Director) is delighted to be back at The Muny, having conducted Billy Elliot in 2014 and Jesus Christ Superstar in 2017. Colin studied at Oxford University, the Royal College of Music and University of Miami. Currently music director/conductor of Hamilton in Chicago. Past music supervisor/director credits include: The Lion King and Billy Elliot (13 companies of each, worldwide), Wicked, Rent and The Who’s Tommy (5 companies). For the English National Ballet, Colin has conducted productions of Swan Lake, Coppélia, The Nutcracker, Giselle, Cinderella and Romeo and Juliet. Colin has also orchestrated for the New York and Boston Pops orchestras. He has conducted recordings ranging from Mahler and Stravinsky (BBC Symphony) to pop and big-band albums, composed two produced musicals and is at work on his first opera.

ROB RUGGIERO (Director) is thrilled to be returning for The Muny’s 100th season. Previous Muny: The Music Man, Oklahoma!; Hello, Dolly!; South Pacific and The King and I. Selected Repertory Theatre of St. Louis: Follies, Sunday in the Park with George, The Little Dog Laughed, Urinetown and Take Me Out. Broadway: High and Looped. Conceived and directed the original musical revue Make Me a Song: The Music of William Finn (Drama Desk and Outer Critics Circle nominations). Recently directed the major “revisal” of Rags, at Goodspeed Musicals, where he also directed highly-successful productions of La Cage aux Folles, Fiddler on the Roof, The Most Happy Fella, Carousel, Annie Get Your Gun, Camelot, Big River, 1776 and Show Boat, (West End production 2016). Producing Artistic Director for TheaterWorks in Hartford, Connecticut.

RALPH PERKINS (Choreographer) returns to The Muny after choreographing The Wizard of Oz (2016), Hello, Dolly! (2014); South Pacific (2013) and The King and I (2012). Other credits: Follies, Sunday in the Park with George, Kiss Me, Kate and Urinetown for the Repertory Theatre of St. Louis; La Cage aux Folles, Camelot and 1776 for Goodspeed Musicals; South Pacific for Paper Mill Playhouse and The Asolo Repertory Theatre, and Sweet Charity for Barrington Stage. Perkins was artistic director and co-founder of The New Works Project in Las Vegas, where he also choreographed EFX at the MGM Grand, Siegfried & Roy at The Mirage and Tournament of Kings. Ralph is currently the director of dance for the theatre division at The Hartt School, University of Hartford in Connecticut.

MEET ME IN ST. LOUIS
Songs by Hugh Martin and Ralph Blane
Book by Hugh Wheeler
Based on “The Kensington Stories” by Sally Benson and the MGM motion picture “Meet Me in St. Louis”

JOSH WALDEN (Choreographer) returns to The Muny after choreographing The Little Mermaid in 2017 and Buddy: The Buddy Holly Story in 2015. Directed/choreographed A Chorus Line for Maltz Jupiter Theatre and Theatre Memphis, The Rocky Horror Show for the University of Buffalo, Legally Blonde for Merry-Go-Round Playhouse, and the rock opera Fallen Angel for the New York International Fringe Festival. He has also choreographed for Signature Theatre, Sacramento Music Circus, Doonce Productions, Actors Theatre of Louisville, Gateway Playhouse and Morag Productions for Seabourn Cruise Lines. On Broadway, Josh was the associate director/associate choreographer for the revival of Ragtime. As a performer, he has been in Broadway revivals of 42nd Street, La Cage aux Folles, A Chorus Line and Ragtime.

Muny gift cards for the 100th season are now available online and at The Muny Box Office. For more information, visit muny.org or call (314) 361-1900.

World Wide Technology (WWT) and The Steward Family Foundation have once again made a leadership gift to continue as the Muny’s 2018 Season Presenting Sponsor. They became the first overall season sponsor in the history of The Muny in 2014 and continue that role through 2018.

The Muny’s mission is to enrich lives by producing exceptional musical theatre, accessible to all, while continuing its remarkable tradition in Forest Park.  As the nation’s largest outdoor musical theatre, we produce seven world-class musicals each year and welcome over 350,000 theatregoers over our nine-week season. Now celebrating 100 seasons in St. Louis, The Muny remains one of the premier institutions in musical theatre.