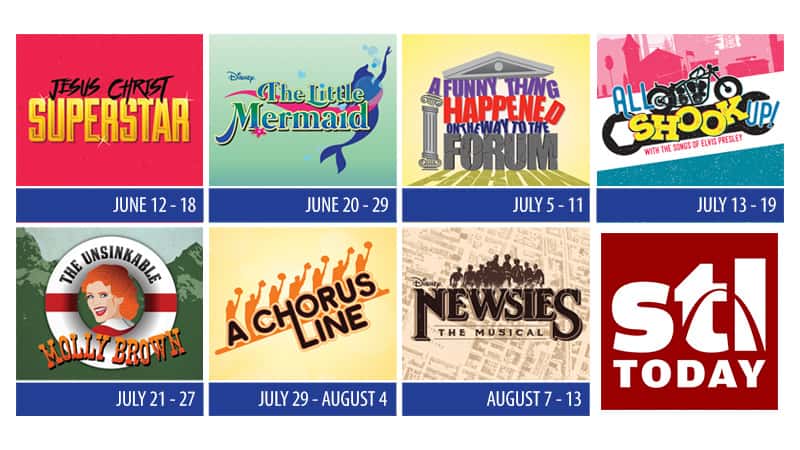 The Broadway hit “Newsies” and a new show, “All Shook Up,” will bring the 2017 Muny season something fresh — but in very different ways.

“Newsies” is a traditional musical that tells a child-friendly story with lots of lively dance. “All Shook Up” sounds like the perfect sequel to one of the biggest hits in recent Muny seasons, “Buddy: The Buddy Holly Story,” and it does have an Elvis Presley score, plus a story by William Shakespeare.

Seven shows will play the Muny next summer, its 99th season. The five others have played the big outdoor theater in Forest Park before, but not recently.

“Newsies” is based on real events in turn-of-the-century New York, telling the story of boys from the slums who took on publishing giant Joseph Pulitzer to demand better wages. Featuring a big cast of kids, “Newsies” closes the season.

“All Shook Up” is based on Shakespeare’s “Twelfth Night,” the story of a young woman in disguise as a young man. But in this version, the story is transferred to the Midwest in the 1950s. Presley stands for everything that Eisenhower’s America fears and that the kids are drawn to.

In fact, all of the 2017 shows made the top 10 on the 2016 audience survey. Consequently, “we have the exciting opportunity to offer our audience a season that is exactly what they asked for,” said Denny Reagan, the theater’s president and CEO.

Meredith Willson’s “The Unsinkable Molly Brown” was in that top 10 as well. But this summer will introduce Muny audiences to a new version, revised to incorporate more songs from the Willson canon. The book is by Dick Scanlon, who wrote the book for “Thoroughly Modern Millie” and other musicals.

“Molly Brown” still tells the story of a Hannibal girl who went to Colorado and married a miner who became fabulously wealthy. But unlike others in her position, Molly opened a soup kitchen and fought for immigrants. Ultimately she boarded the Titanic but survived, rescuing others in the process. “It’s a classic American musical: beautiful and heartfelt,” said Mike Isaacson, the Muny’s artistic producer and executive producer. “And what Dick has done with it is extraordinary.”

“The Little Mermaid,” of course, has special appeal for children, but many adults also treasure the Alan Menken/Howard Ashman musical about love between a human prince and a girl who’s half fish. The score includes “Kiss the Girl” and the Oscar for winner best song, “Under the Sea.” The 1989 movie that inspired the stage musical is widely considered the start of the Disney renaissance.

On the other hand, Stephen Sondheim’s “A Funny Thing Happened on the Way to the Forum” is more grown-up fare. A raucous, bawdy comedy set in ancient Rome, it marked Sondheim’s Broadway debut as a composer and as a lyricist.