Next summer, the Muny will stage its 100th season of musical entertainment in Forest Park. Few theaters reach such a milestone, and none in the United States has reached it in its original venue. 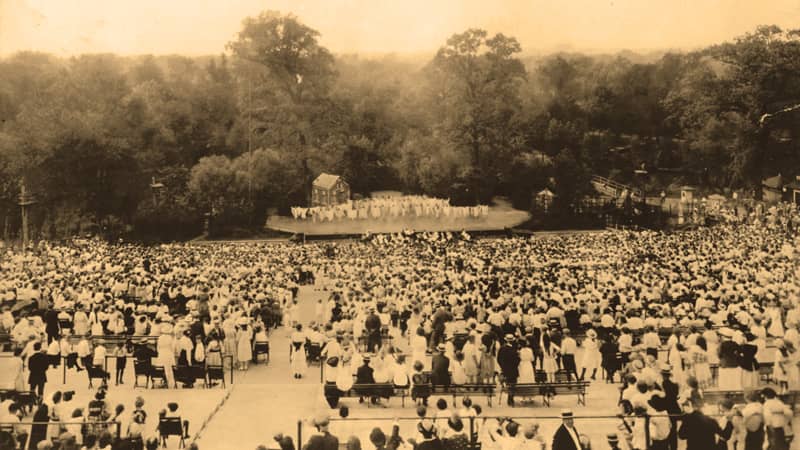 How did it happen here?

Once a month for the next 10 months, we’re going to take a decade-by-decade look at the history of the Muny in words, pictures and music. Drawing on old stories from the Post-Dispatch and on the work of Muny archivists, we’ll to try to capture the flavor of a unique institution that styles itself, with a combination of pride and accuracy, “Alone in its Greatness.”

Forest Park was always beautiful. Opened at the western edge of St. Louis in 1876, it acquired its aura of celebrity in the next century as the site of the 1904 World’s Fair. After that, it was the obvious choice for all kinds of community celebrations.

In 1914, a four-day Pageant and Masque to celebrate the 150th anniversary of the founding of the city was staged at the base of Art Hill. Some 7,500 St. Louisans performed in this extravaganza, which depicted local life from the era of the Mound Builders to the Civil War. It drew 400,000 visitors and made it clear to everyone that Forest Park was a great place for shows.

Just two years later, a famous classical actress and producer, Margaret Walsh Anglin, came here to present and star in an outdoor production of “As You Like It.”

The site she chose for the play? The Muny stands there now.

In 1917, a big advertising convention was held in St. Louis. The entertainment included a production of “Aida,” a grand opera that the Post-Dispatch hailed as the “Inaugural of St. Louis’ Open-Air Theater.” The site, which by now had a stage and seats, continued in popularity, drawing audiences to fashion shows, concerts, patriotic celebrations and fairy tales enacted by children in St. Louis playground programs. The 1918 playground show, “Robin Hood,” featured Mayor Henry Kiel in a small role.

The prime mover of the theater, Kiel saw big potential in outdoor entertainment that everyone could enjoy. Creating what we would now call a public-private partnership, he marshaled the business community and wealthy St. Louisans to back the Municipal Theater, run by the Municipal Theater Association. He knew money wasn’t everything; he also urged schoolchildren to collect pennies for the project.

The Muny opened on June 16, 1919, with a production of “Robin Hood” and a season of five more shows. The most expensive tickets cost $6; the cheapest were a quarter. And the free seats were already there.

Throughout those first 10 seasons, pleasure in and concerns about the Muny (as it was soon called) were covered enthusiastically in the Post-Dispatch. Some of the themes were specific to the era and to the novelty of the enterprise. Some sound a lot like Muny stories of, say, this past season.

Imagine the sound of rustling paper and the tangy aroma of ink. It’s all still here, in the files that we’ve opened up. Take a peek.