The Muny announced today its complete cast, design and production team for Footloose, the fifth show of its second century, July 18 – 24. Footloose is proudly sponsored by U.S. Bank.

"The 80s are alive again as the town of Bomont prepares to take the Muny stage," said Muny Artistic Director and Executive Producer Mike Isaacson. "This is an incredible company and team to give the show a vibrant and fresh life." 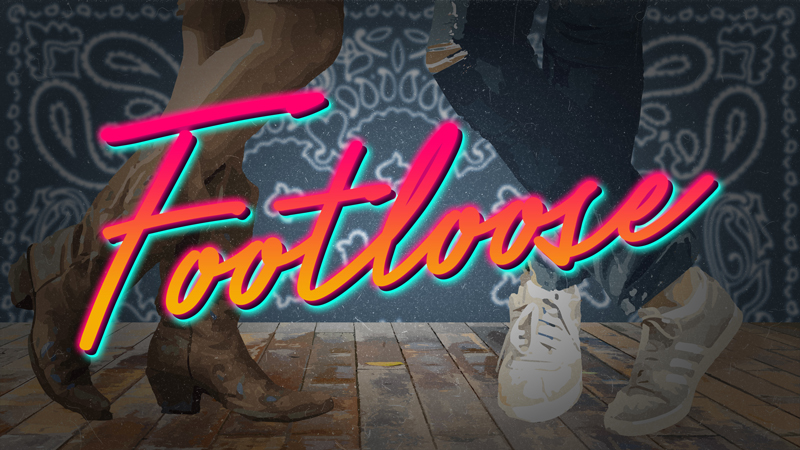 As previously announced, Footloose is directed by Christian Borle and choreographed by Jessica Hartman with music direction by Andrew Graham.

JEREMY KUSHNIER (Rev. Shaw Moore) can’t think of a better way to be making his Muny debut than with the show that was his Broadway debut 21 years ago. Other Broadway credits include Roger in Rent, Tommy DeVito in Jersey Boys and most recently King Basilius in Head Over Heels. He has appeared on TV in The Good Wife, Person of Interest and Nurse Jackie. He can now be seen starring in the feature film The Idea of Manhood, currently on most streaming sites.

MASON REEVES (Ren McCormack) is an Arizona native and is thrilled to be making his Muny debut! Regional credits include A Chorus Line (Richie, Heritage Theatre Festival), Guys and Dolls (Bucks County Playhouse) and The Upside of Down (New Works Festival, Phoenix Theatre). University credits include We Are Proud to Present… (Actor 2), Passing Strange (Terry) and The Last Days of Judas Iscariot (Jesus of Nazareth). Film: Inhuman (Elliot). He is a rising senior pursuing a BFA in Musical Theatre at the University of Michigan. Instagram: @rasonmeeves

McKENZIE KURTZ (Ariel Moore) is thrilled to be making her Muny debut in Footloose! McKenzie is a recent graduate of the University of Michigan’s School of Music, Theatre, and Dance with a BFA in Musical Theatre. Her latest roles at school include Nickie in Sweet Charity and Lady Jackie in Me and My Girl. Last year she worked with choreographers Robert Hartwell and Mara Greer, as well as Emmy nominated director/choreographer Al Blackstone at Music Theatre Wichita for their 2018 summer season. There, she also played high school bully Savannah Sweetzer in the premiere of Disney’s Freaky Friday. @mckenziekurtz

HEATHER AYERS (Vi Moore) is thrilled to be returning to The Muny after appearing as Velma Von Tussle in Hairspray. She appeared on Broadway in Groundhog Day, Mel Brook’s Young Frankenstein, On a Clear Day You Can See Forever and Trevor Nunn’s A Little Night Music. Heather has been seen off-Broadway and in regional theatres across the country. Her TV credits include Scandal on ABC, I Love You, America with Sarah Silverman on Hulu, American Vandal on Netflix, Brockmire on IFC & the forthcoming season of The Affair on Showtime. She is the sister of Broadway actor Becca Ayers. www.heatherayers.com

DARLESIA CEARCY (Ethel McCormack) is a Broadway veteran whose shows include Ragtime (Sarah, Helen Hayes nominee), Shuffle Along (Lottie Gee), The Color Purple (Nettie), Once on This Island (Erzulie), The Book of Mormon and The Goodbye Girl. She was a Viva Award nominee for her single Everlasting Pictures, which appeared on MTV’s Most Wanted, VH1 and Top of the Pops in London. TV: Madam Secretary, House of Cards, Elementary and more. [email protected]

AARON KABURICK (Wes Warnicker) first appeared at The Muny in the teen chorus of Godspell in 1995 and continued to appear in many more Muny productions, the last of which was Damn Yankees in 2010. Most recently, he was in the original cast of the Broadway revival of Hello, Dolly! starring Bette Midler and Bernadette Peters. His other Broadway credits include Something Rotten!; Motown the Musical, Sister Act (starring Raven-Symoné) and Billy Elliot. He also appeared in the national tours of The Full Monty, Annie and Billy Elliot. Regional: Delaware Theatre Company, North Carolina Theatre, New Harmony Theatre and Music Theatre Wichita.  Hometown: Carlinville, IL. College: Boston University. @aaronkab

KHAILAH JOHNSON (Rusty) is thrilled to be making her Muny debut! Favorite roles include Sister Act (Deloris) and Sunday in the Park with George (Yvonne). Regional: The Colored Museum (Crossroads Theatre). She also sang as Tiana in the Broadway Princess Party and been a dancer in Disney’s Main Street Electric Parade. She is the proud recipient of the Paper Mill Playhouse Rising Star Award for Leading Actress. She is a rising Junior at Carnegie Mellon pursuing a BFA in Musical Theatre. @khailahjohnson

MAGGIE KUNTZ (Urleen) is thrilled to be a part of the Muny magic once again! A St. Louis native, she spent many summer nights performing with the Muny Kids and Teens and is beyond grateful to be back in such an extraordinary creative space. Maggie recently completed her first year at the University of Michigan, where she is currently pursuing a BFA in Musical Theatre. University credits include Broadway Our Way (dir. Michael McElroy) and Sweeney Todd.

KATJA RIVERA YANKO (Wendy Jo) is over the moon to be making her Muny debut this summer! Other credits include Dead Man Walking (Houston Grand Opera) and concert performances with The Houston Symphony and Oklahoma City Philharmonic. She is a native of Houston, Texas and a proud alum of The University of Oklahoma.

ANDREW ALSTAT (Chuck Cranston) from Pomona, IL is very excited to make his Muny debut in Footloose! He currently is getting his BFA in musical theatre from the University of Cincinnati College-Conservatory of Music. Recent educational credits include The Hunchback of Notre Dame (Frederick), Guys and Dolls (Angie the Ox), Jesus Christ Superstar and Children of Eden. Regional credits: Newsies (Albert), Footloose (Jeter) at Wagon Wheel Center for the Arts. Legally Blonde (Emmett), Anything Goes (Billy Crocker) at McLeod Summer Playhouse. Other credits: Soloist at Kings Island amusement park. Instagram: @a12tat

ELI MAYER (Willard Hewitt) is so excited to be making his Muny debut as Willard! Originally from Acton, MA, Eli is a rising junior at the University of Cincinnati, College-Conservatory of Music. Previous credits include Ensemble in the world premiere of William Finn’s Royal Family of Broadway at Barrington Stage Company and Zanni/Huntsman in RagTag Theatre’s reading of Snow White. IG: elimayermaynot

FLORRIE BAGEL (Betty Blast) is tickled pink to be at the Muny for the first time. Back in NYC, she's fresh from Call Me Madam, Me and My Girl, Brigadoon and The Golden Apple with City Center Encores! She played Peaches in off-Broadway's gleefully profane and shockingly beautiful, Jerry Springer: The Opera, and spent last summer singing in Irish Repertory Theatre's production of Alan Jay Lerner’s On a Clear Day You Can See Forever. She ventured across the country in the first national tours of Sister Act (Sister Mary Patrick) and Kinky Boots and is glad to be back in St. Louis! Most recently, Florrie honored soulful star, Amy Winehouse with her concert, Through the Smoke at NYC's lush cabaret venue, 54 Below. www.FlorrieBagel.com

REBECCA YOUNG (Eleanor Dunbar) is thrilled to be returning to The Muny stage! Past Muny shows include Annie, The Music Man and the centennial gala An Evening with the Stars. NY/National tours: The Producers, The Radio City Christmas Spectacular. Regional: Carnival! (The Kennedy Center), Fiddler on the Roof (Golde), On the Town and My Fair Lady (Stages St. Louis).

PATRICK BLINDAUER (Coach Dunbar) returns to the Muny stage, having previously appeared in Annie (Bundles, Ensemble), Singin' in the Rain (Rod, Ensemble), and 42nd Street (Mac, Thug, Doctor). He's a graduate of The Conservatory of Theatre Arts at Webster University and a crossword constructor for The New York Times, USA Today, Crosswords with Friends, and his website, patrickspuzzles.com. On-screen, Patrick appeared in the film A Beautiful Mind and 7 episodes of Strangers with Candy. His other local projects include Love's Labors Lost (Costard) and Romeo & Juliet (Prologue, Peter, Apothecary) for Shakespeare Festival St. Louis, Seussical (Horton) for Arrow Rock Lyceum Theatre, and The Wizard of Oz (Lion) for Variety Theatre.

Kick off your Sunday shoes with this 80s favorite! Based on the 1984 Academy Award-nominated blockbuster hit, Footloose shows how a little teenage rebellion and a love of music can open hearts and transform a town. Featuring chart-topping hits, including “Let’s Hear It for the Boy,” “Holding Out for a Hero” and the Grammy-nominated title track “Footloose,” this four-time Tony Award-nominated dancing-sensation will have the entire family burning and yearning to cut loose!