First Round of Casting Announced

The Muny announced today 21 principal cast members for its 99th season. Full company casting will be announced throughout April. The 2017 Muny season opens with Jesus Christ Superstar followed by Disney’s The Little Mermaid and A Funny Thing Happened on the Way to the Forum. The season continues with the premiere of All Shook Up! and a newly re-envisioned The Unsinkable Molly Brown. Season 99 closes with A Chorus Line and the much-anticipated Muny debut of Newsies.

"We are so proud to announce our initial casting for our 99th season," said Muny Artistic Director and Executive Producer Mike Isaacson. "Months of auditions and searching led by casting director Megan Larche Dominick resulted in this list of extraordinary artists. I’m so grateful so many talented people will be joining us for our 99th season.” 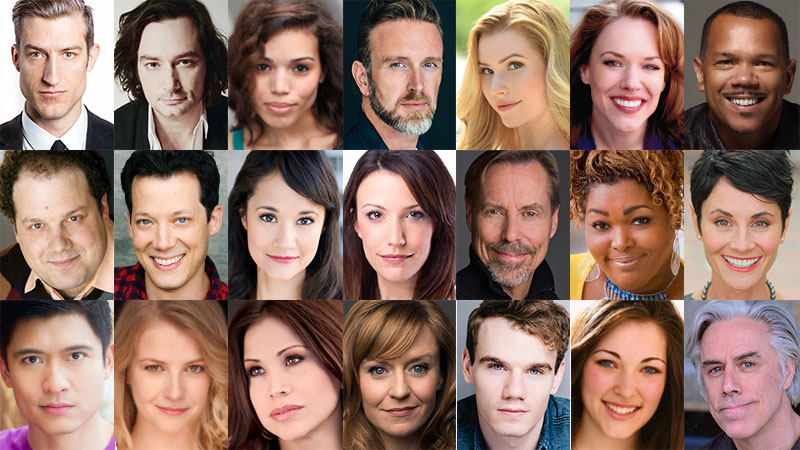 CONSTANTINE MAROULIS (Judas Iscariot) is an accomplished actor, producer, singer and songwriter best known for his Tony-nominated performance in Rock of Ages and his epic run as a finalist during the heyday of American Idol. Currently, Constantine is developing a number of creative projects in TV and film, including Tony-nominated work as a producer of Broadway’s revival of Deaf West's Spring Awakening, as well as recently releasing the singles, “Here I Come,” “She’s Just Rock N Roll” and “All About You” from his upcoming album. Constantine recently closed out his starring role in the critically acclaimed Second Stage Theatre production of Friend Art. Find all his social media and tour dates at www.ConstantineMaroulis.com

CIARA RENÉE (Mary Magdalene) starred as the “Leading Player” in the recent Broadway revival of Pippin. On Broadway, Renée also appeared in Big Fish. Ms. Renée originated the role of “Esmeralda” in The Hunchback of Notre Dame (Paper Mill Playhouse). She has been seen in productions of The Wild Party, Sondheim on Sondheim, Dreamgirls, Carousel and Passing Strange, among others. TV: DC’s Legends of Tomorrow and Netflix’s Master of None. Follow Ciara on Twitter @CiaraRenee8

EMMA DEGERSTEDT (Ariel) is a Swedish-American actress who began her career in Los Angeles. She spent her teenage years playing “Maris Bingham” on Nickelodeon’s teen sitcom Unfabulous and originated the role of “Kendra” in Jason Robert Brown’s musical 13 for which she received a Los Angeles Drama Critics Circle Award. She was later nominated for LA's Ovation Award for her portrayal of “Elle Woods” in Legally Blonde, which she has performed in six productions across the country. While completing her bachelor’s degree at UCLA, she starred in shows at the Pasadena Playhouse as well as Tuacahn Amphitheatre. Her television/film credits include: The Big Bang Theory, Hannah Montana, Life, Samantha Who and The Curious Case of Benjamin Button. Other theater work: Little Mermaid (Tuacahn Amphitheatre), Legally Blonde, Footloose, Xanadu, A Chorus Line and Sleeping Beauty.

JOHN TARTAGLIA (Hysterium) Broadway: Avenue Q (Tony nomination), Disney’s Beauty and the Beast, Shrek the Musical. At 16 John was cast as a puppeteer on Sesame Street. He went on to create, executive produce and star in his own preschool series Johnny and the Sprites for Disney Junior (8 Emmy Award nominations). As a director: The Wizard of Oz, Tarzan and Shrek (The Muny), Dinosaur Train Live and Sid the Science Kid Live (national tours), Claudio Quest (NAMT), Lord Tom (York Theater), Shrek the Halls (DreamWorks Theatricals), Because of Winn Dixie (Arkansas Rep.), amongst others. Current projects include cast member on Jim Henson’s Word Party and Julie’s Greenroom (Netflix) as well as creator, co-executive producer, and cast member of Jim Henson’s Splash and Bubbles (PBS Kids). www.johntartagliaproductions.com

ALI EWOLDT (Philia) played “Maria” in The Muny's 2013 production of West Side Story and is thrilled to return to St. Louis! She is currently playing “Christine” in The Phantom of the Opera on Broadway. Other credits include: Les Miserables Broadway revival (Cosette), The King and I Broadway revival at Lincoln Center, West Side Story Broadway revival 1st national tour (Maria), The Fantasticks off-Broadway (Luisa), Lyric Opera of Chicago's The King and I (Tuptim), McCarter Theatre's A Christmas Carol (Fan/Mrs. Bonds) and concerts at Feinstein's/54 Below, Alice Tully Hall, Carnegie Hall and The Town Hall. TV/Film credits include: The Michael J. Fox Show, Yield and Drama: The Web Series. Ali has a B.A. in psychology from Yale University. www.aliewoldt.com

CAROLINE BOWMAN (Natalie Haller) is thrilled to make her Muny debut! She was last seen on Broadway as “Elphaba” in Wicked. She was also in the original cast of Kinky Boots on Broadway. She has been seen in national and international tours of Evita (Eva Perón), Spamalot (Lady of the Lake), Grease (Rizzo), Fame (Carmen). She had the honor of reprising the role of “Eva Perón” in Evita with the Vancouver Opera. Recently, she made her solo concert debut at 54 Below in New York City and can be seen around the country performing with various symphonies and cabaret venues. She is forever grateful to Soffer/Namoff Entertainment and Innovative Artists for believing in her. www.carolinebowman.net

LARA TEETER (Jim Haller) a veteran song and dance man, is currently a Professor of Theatre and head of the Musical Theatre Program at the Webster Conservatory. He has performed in opera houses, national tours, and many Broadway shows, including the 1982 revival of On Your Toes, for which he received a Tony nomination. Lara has performed on the Muny stage since 1990 in such classics as Singin’ In the Rain, Beauty and the Beast and The Little Mermaid. For the Variety Children’s Theatre, he has directed and choreographed eight shows including last year’s Beauty and the Beast which earned him a St. Louis Critics Circle nomination for best choreography. He and his wife, Kristen, are the proud parents of Charlie, Elizabeth, Katherine and Maggie.

LIZ MIKEL (Sylvia) is delighted to return to The Muny. Previous Muny credits include: Seussical (The Sour Kangaroo), Hairspray (Motormouth Maybelle). Liz originated the role of “Hetaira” in Lysistrata Jones on Broadway. She is most known for her portrayal of the no nonsense “Corinna ‘Mama Smash’ Williams” on NBC’s Friday Night Lights. Other TV/Film credits include: Welcome Home Roscoe Jenkins, Past Lives, Dallas, The Secret Life Of Walter Mitty and Get On Up. She is a resident acting company member at Dallas Theater Center and a recipient of the prestigious Lunt Fontanne Fellowship.

BETH MALONE (Molly Tobin) originated the leading role of “Alison” in the 2015 Tony Award winning musical Fun Home, which earned her a Tony nomination. Her journey with Molly began with The Unsinkable Molly Brown production at Denver Center in 2015.  Broadway and off-Broadway credits also include: Ring of Fire, Bingo, Fun Home and The Marvelous Wonderettes. Regional: Sister Act, Annie Get Your Gun. TV: BrainDead, The Good Wife, Reno 911!; Judging Amy, What’s On?; One Minute Soaps. Film: The Comedian with Robert De Niro, Hick with Eddie Redmayne, The Interview.

BIANCA MARROQUÍN (Cassie) Born in Monterrey, Mexico, Bianca began her stage career in Mexico City in productions of Beauty and the Beast, Rent, The Vagina Monologues, The Phantom of the Opera, Mary Poppins and Chicago, later making her Broadway debut as “Roxie Hart” in Chicago. Other Broadway and theatre credits include: In the Heights, The Pajama Game and “Anita” in West Side Story (Carnegie Hall's The Somewhere Project). Currently a judge on Univision's Pequeños Gigantes.

MEGAN SIKORA (Sheila) is honored to return to The Muny this year after making her Muny debut last year as “Anytime Annie” in 42nd Street. She can be seen this fall in the new Netflix series Gypsy, starring Naomi Watts. Megan has performed in 10 Broadway shows, 2 off-Broadway shows, dozens of regional productions, and the nightly dance party that goes on in her living room with her 5-year-old son. She was most recently seen on Broadway in Holiday Inn as “Lila Dixon” at Studio 54. You can find out more at megansikora.com