Filled with songs we already love, Muny’s ‘All Shook Up’ is a charmer

The Muny continues this exceptionally polished season with a show that’s never been here before, “All Shook Up!” It’s a jukebox musical — a show (such as “Mamma Mia!” or “Buddy — The Buddy Holly Story”) that incorporates songs that were already hits on their own. 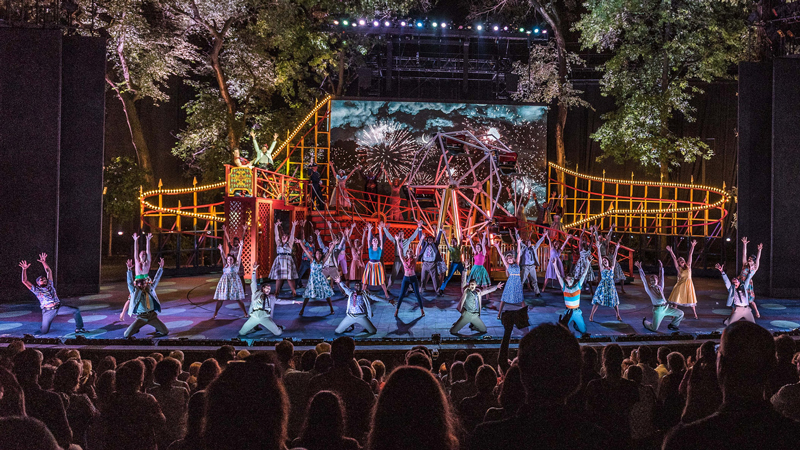 And in this case, the jukebox comes loaded with Elvis Presley hits.

Could the Muny offer us a better guarantee?

Throw in a crazy, complicated romantic comedy that writer Joe DiPietro loosely (loosely, loosely) based on Shakespeare’s “Twelfth Night,” and you have a charmer.

Caroline Bowman, a delight with a vivacious singing style, plays Natalie, a mechanic who works in her father’s garage. She’s a tomboy who eschews the flirty full skirts other girls wear (it’s the 1950s) for practical overalls. (Think of Shakespeare’s Viola, disguised as a boy in Illyria.) But when a roustabout named Chad (Tim Rogan) rolls into town on a motorcycle that needs work, he awakens something in Natalie and most of the other women in town.

Handsome Rogan is a terrific dancer who opens the show with swiveling hips that get right to the point. He also smiles a lot — did Elvis do that? Didn’t he mostly pout?

No matter. Chad — who is definitely not Elvis; no, no, no, no, no — is just one character among many in “All Shook Up!” It’s a true ensemble piece, and director Dan Knechtges never forgets that. He gives everyone his or her chance to shine.