Special Edition of “Newsies” This Week at The Muny

There were 9,000 people in the audience last night at The Muny. (Ok, 8,999 “officially.”) After the curtain calls, when the house lights went up as the cast was leaving the stage, some of the performers stopped in their tracks and just looked out at the exiting throng. I believe it was at that time that they realized that they had pulled off a spectacular show in front of possibly the biggest audience of their careers. It was a remarkable moment for the cast and those in the audience who noticed it.

Jay Armstrong Johnson leads the company as Jack Kelly, organizer of the strike. Daniel Quadrino is Crutchie, a cripple who gets impacted the worst during the strike. Quadrino was in the New York company of “Newsies” and understudied that role. 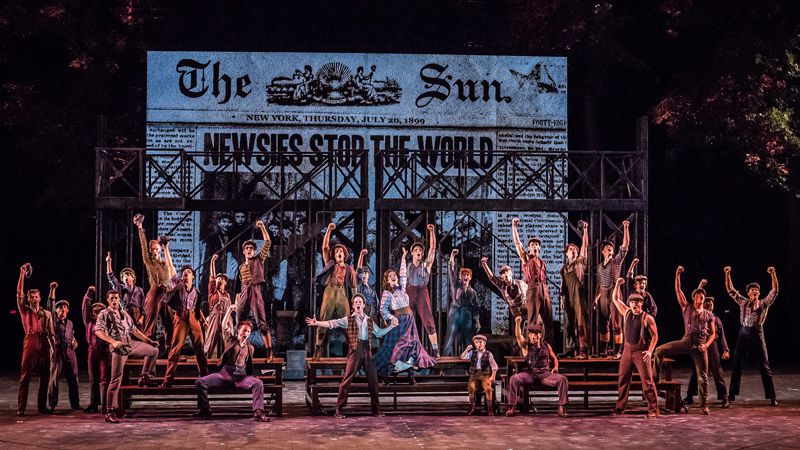 Little Gabriel Cytron steals nearly every scene he’s in as Les, the youngest of the newsboys.

Tessa Grady is Katherine, Jack’s eventual love interest. Ta’Rea Campbell appears as Medda Larkin, owner of a burlesque theater who is sympathetic to the plight of the youngsters.

“Seize the Day” is the big musical number and it is reprised in the show, but “Newsies” is really all about choreography. The Muny has supplemented the stage with a large youth ensemble that befits this show’s scope. The light wall, which was a big expense for The Muny, again proves it was worth every penny. “Newsies” is brimming with joyous energy and spectacular staging. The show has an innate charm that is irresistible.

It is the perfect anchor show for the 99th season.