The Muny gives a fresh interpretation to ground-breaking ‘Chorus Line’

When “A Chorus Line” opened in 1975, it revolutionized musical theater with its origins (a rap session), its heroes and heroines (the “gypsies” who dance in Broadway ensembles) and its bare-bones, uncompromising visual and emotional style. 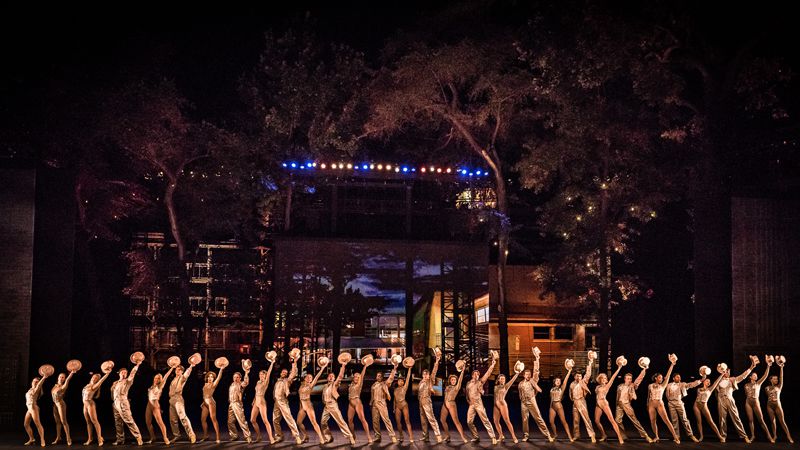 At the time it closed 15 years later, with nine Tony awards and a Pulitzer Prize in drama to its credit, it was the longest-running show in Broadway history.

But in the interval, the world it depicted was ravaged by plague, by an illness that nobody had even heard of in 1975. AIDS would claim many of the artists involved with “A Chorus Line,” including the original director and choreographer, Michael Bennett. And it would turn all of them into mourners, during the years when dancers seemed to go to friends’ funerals almost as often as they went to class.

After the passage of so much time and the change in so much circumstance, it makes sense to find a fresh take on Bennett’s masterpiece.

And that’s exactly what director and choreographer Denis Jones brings to the production this week at the Muny.

Thoughtfully, he creates that without violating the terms of the script, and while honoring the special advantages of the Muny: He does it by bringing in children.

“A Chorus Line” concerns dancers auditioning for a spot in a new Broadway show. Zach (Ivan Hernandez), the director/choreographer, eliminates many of the hopefuls after seeing them dance (“I Hope I Get It”).

But he won’t hire all of the dancers who remain. Instead, Zach wants to hear each one talk about his or her life. He’s particularly interested in their childhood stories.

That’s a novel demand, to say the least. The dancers are uncomfortable. Is Zach just power-tripping? Could be, but what choice have they got? They all need jobs. They want to make the final cut. They’ll talk.