The Unsinkable Molly Brown is Worth Its Weight in Gold

The last time I saw The Unsinkable Molly Brown on The Muny stage was 1989 and its star was Debbie Reynolds. That show was light-hearted, high-energy and packed with singing, dancing, and comedy. The new and improved “Molly Brown” has all of that and more in its revised, historically-accurate dramatic script that leaves the 1960s American musical format in the Leadville dust. 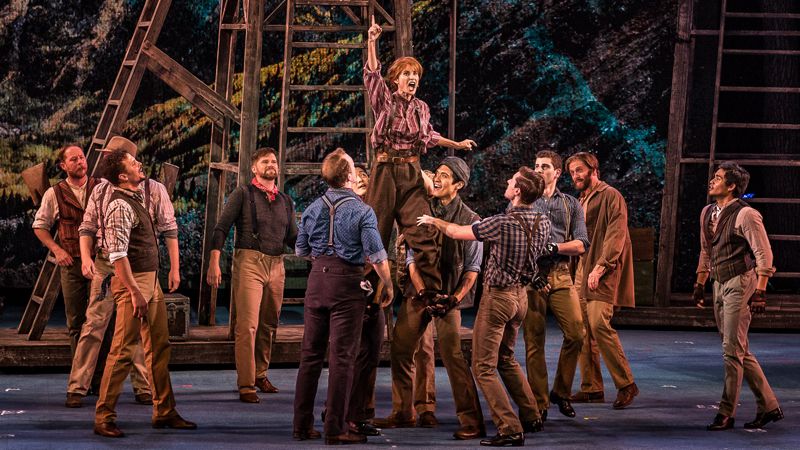 On the hottest night of the year, Beth Malone as Molly Brown burst onto The Muny stage with her flaming red hair and feistiness and took The Muny audience on a journey through the life of Margaret (Molly) Tobin Brown. Her character is as spunky and tenacious as Debbie Reynold’s spirited Molly Brown, but we learn much more about the real woman, who made her way from Hannibal, MO to Leadville, CO in 1886.

When she arrived in a silver mining camp in Leadville, she is dismayed to find out she’s not in Denver, her destination where she expects her dreams to come true. She immediately wants to set out on foot to find Denver, but the miners convince her to stay “until the primroses are blooming,” because winter is coming and there is no way she’s going to be able to make it through the mountains. She meets mining engineer J. J. Brown, they eventually marry, and his gold mine makes them so rich that Molly is able to carry out her philanthropies and political ambitions in the manner she had hoped to be accustomed.

Early in their marriage, J. J. promises Molly “I’ll Never Say No” and takes her to Denver to live. She desperately wants to be a socialite, but she is shunned by the Sacred Thirty-Six, the richest families in Denver. When the Sacred Thirty-Six ignore Molly’s formal dinner invitation, she says, “Ignorant can be learned out of a person; mean is forever.” Molly does everything she can to educate and improve herself so that she can fit in with Denver high society. As time goes on, her ambitions put a strain on their marriage and Molly and J. J. separate.

Molly continues her self-improvement in Europe until she learns that J. J. has had a stroke. She searches for the fastest way to return home and buys a ticket on a new ship, the Titanic, that is sailing for America on April 10, 1912. The Titanic hits an iceberg and the ship sinks on April 12, but Molly takes control of one of the lifeboats and saves the passengers in it. Upon her return to New York, Molly’s son, Larry, meets her with a message from J. J.: “Your mother is too ornery to drown.”